Almost a year ago I lost a good friend. I had actually never met her in person, but she was among the closest, most generous and understanding brave women I have ever known. I had the joy of knowing Tessa Edwards thanks to blogging, and I will forever be thankful for that.

I'm honoring her sweet memory by sharing again one of her lovely recipes, and paying it forward to the community of adventurous and sophisticated women travelers that constitute The Travel Belles, a group I am very proud to be a part of.

The recipe is her own hometown's bobotie, a curried ground meat and egg custard dish, typical of the Cape Malay.

It felt like being in my Nonna's birthplace, the room smelled like wine, cheese and truffles. My Piedmontese roots came alive last night when I was invited at a lovely tasting event. Thanks to Beppe e i Suoi Formaggi for hosting, and Katie Parla for pulling the evening together, I had the chance to taste tajarin (a traditional Piedmont egg and flour long-strand pasta) in 7 ways, down divine French white wines, and even taste Barolo and Barbaresco, in the company of friends. 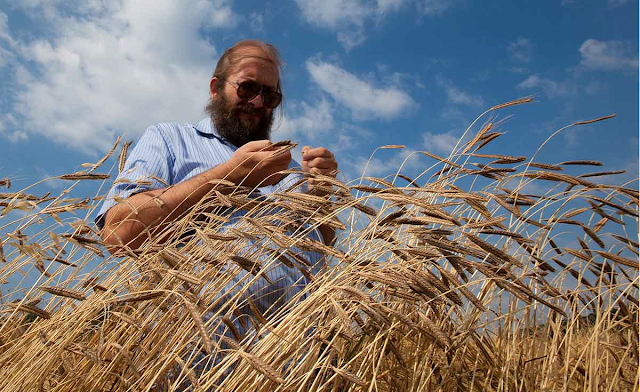 Mauro Musso has a terrific story, one that starts with him pulling off his supermarket employee uniform, and following the whim to create Casa dei Tajarin, an artisan pasta workshop he runs out of the ground floor of his parents' home in Alba.


His tajarin are made with rare flours from ancient autoctonous grains and cereals, only the best in biodynamic and GMO-free staples sourced from Mulino Marino, Italy's premier heritage grain supplier, and organic eggs. Mauro spoke briefly before the carb-fest that followed, and passionately told us how his main focus was to provide a healthy, all-natural version of the traditional pasta of Piedmont's Langhe region, with digestibility taking first place, even before flavor. But I can assure you that the taste of his tajarin is exceptional. The dressings were very mild and subtly brought out the different flavors of the flours used in each different tajarin kind we tasted. 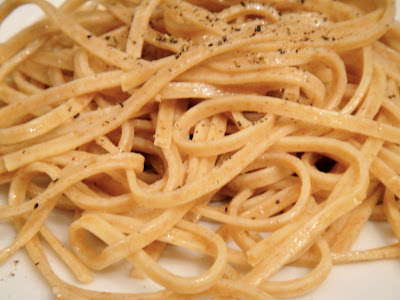 Tajarin made with einkorn flour, dressed with Taggiasca olive oil and cracked black pepper.
No wine was paired with this dish in order to avoid interference with the flavor of the "Enkir" pasta. 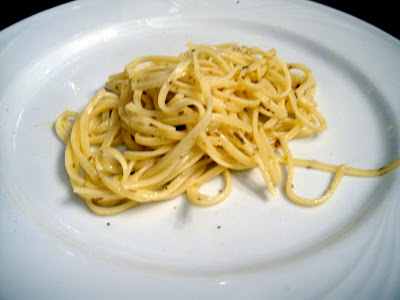 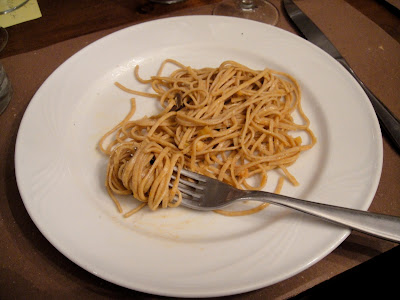 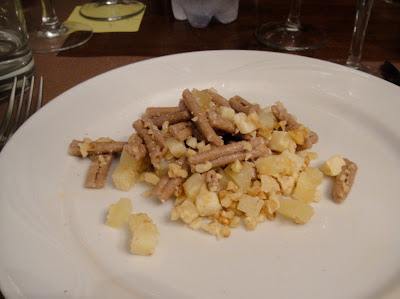 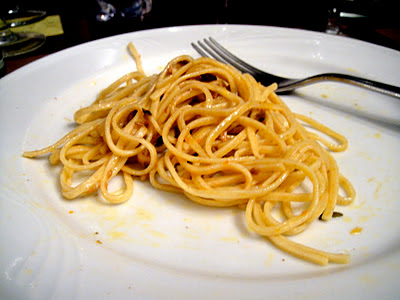 More Einkorn flour tajarin tossed with mixed vegetables and thyme. The wine was a 2004 Friulano "Galea" by I Clivi di Corno di Rosazzo.

Next up was "Sapori Antichi" tajarin, a blend of Einkorn, spelt, kamut, and rye dressed in a rabbit ragù. I gobbled it up so fast, I forgot to take a picture. With the meat sauce, we switched to a 2004 Barbaresco "Montestefano" of Cantina Baldo Rivella.

The triple "Khorasan" flour tajarin with a 3-meat ragù was the last sample, and by this time I was tipsy, so I only had a sip of Barolo Cantina Giulio Viglione (2004).

The platter of mixed cheeses that followed, had a smear of organic fig jam, pomegranate kernels and walnut meats. Oh, and a slice of fresh pear. The Robiola, Torretta di Capra and the Toma were my favorites. 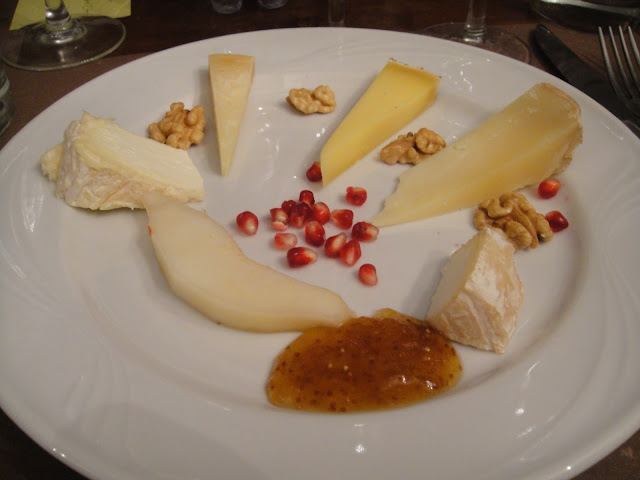 At midnight my babysitter started freaking out, so I sadly had to skip dessert, which was the typical Piedmontese Panna Cotta. I'm sorry I couldn't stay and chat with the other participants sitting in the other rooms, and mostly that I couldn't say good-bye to Mauro, the tajarin master.

It was great to learn about his small pasta operation, and it was a treat to share the meal and wine with such a wonderful group of friends, all with one thing in common: love for good food.

Flash cut to today at noon. I'm meeting a fellow blogger/foodie friend visiting from out of town at Bonci's Pizzarium, and guess who was delivering three crates of assorted tajarin to be sold at the famed pizza shrine?

I made the papers!

There was a lovely article about my food blogging in the Rome issue of Corriere della Sera this weekend. It talked a bit about my childhood, my family, how I came to blogging, and how my career has evolved out of film and into food writing. It was a very well written article, and condensed the friendly, hour-long chat I had with columnist Maria Egizia Fiaschetti, who penned the story.

Here is an online version of the printed article.
Definitely going into my book proposal package to publishers! 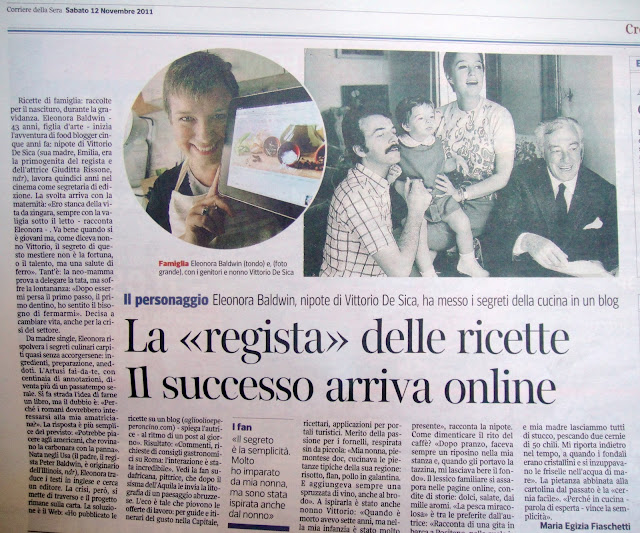 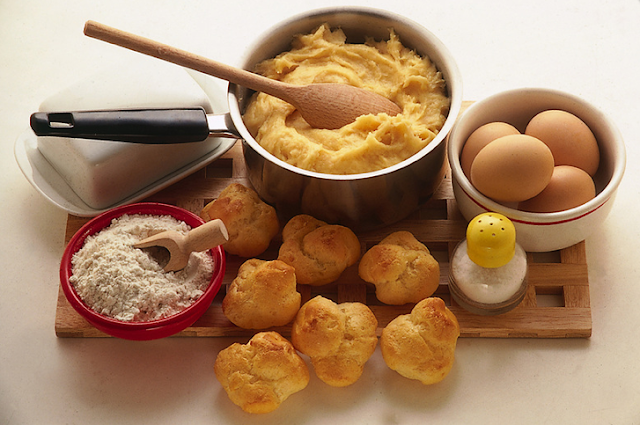 When I say the word, I can actually smell the sugary aroma of the three squared beignets in my plate at Café Du Monde. I don't think I have ever tasted anything quite like it.

Italian bigné are different. Some are fried, as in the case of the Zeppole di San Giuseppe fritters, but normally bigné are light choux pastry puffed balls that are baked in the oven. These cream puffs are also the base for Profiterole, filled with whipped cream or gelato, and drizzled with lavish amounts of melted dark chocolate. 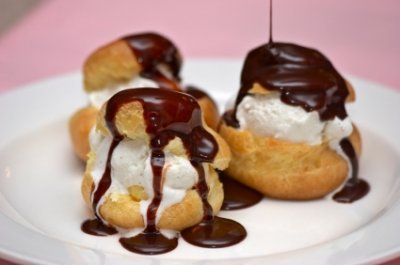 Bigné were introduced in France by Caterina de' Medici, wife of Henry II of France, who brought with her from Tuscany lots of recipes, including choux pastry. Leave it to history that the name traveled from Florence all the way to French New Orleans...

I fill my bigné by slicing off the top, filling with a spoon, and then reassembling. It can obviously be done by injecting with a pastry bag and a narrow piping tip, but that always turns out a mess for me.

Today I'm sharing the recipe for a savory hors d'oeuvre version, loaded with a creamy 3-cheese filling, that yields about 24 assembled bigné


Start by making your bèchamel, which is the base of the filling.

Melt the butter in a stainless steel pan over low heat. Gradually sprinkle in the flour, and stir well with a wooden spoon until smooth. Cook gently until the mixture becomes a light golden color. Add the boiling hot milk gradually, stirring constantly to avoid lumps. Cook for another 15 minutes (at least) while stirring constantly.

When the bèchamel becomes rich and creamy in consistency – not too thick and not to runny, rather forming ribbons on the surface as it dribbles off the wooden spoon – remove from the heat, and dilute with a little more milk. Don't pour it in all at once, rather use it to blend the cheeses as you add them, and they melt and bubble.

Fold in the pecorino and parmigiano first, leaving the fontina last.

When all the cheeses are blended and well incorporated, let the mixture stand to cool while you make the choux pastry.

Pour yourself a drink, by now you've totally earned it.

Heat the water with a pinch of salt. When it begins to tremble, right before reaching boiling point, add the butter and let it melt. Sift in the flour, remove the pot from the stove, and stir constantly until the dough comes away from the sides of the pan and forms a smooth ball (this will take about 5 minutes, have faith: it will happen). Let it stand to cool briefly.

Once the dough is lukewarm, start adding one egg at a time and mix with a wooden spoon until it reaches a smooth, paste-like thickness. I cheat and give it one last whir with a food mixer.

Spoon the bigné dough onto a baking sheet lined with parchment paper. Again this can be done with a pastry bag, I use two spoons...

Bake the bigné for about 15 minutes, until golden and well-puffed, time greatly depending on oven force. The trick to perfect puffing bigné is to keep the temperature quite low and steady. Ventilated ovens are the best. Mine isn't...

Once your bigné have completely cooled down, using a sharp serrated blade, slice the bigné open as you would a bun, and slather 1 tablespoon (or more) of the creamy cheese filling in each, reassembling as you go along. Any leftover filling can be employed as dip for crudité, or spread on crostini, bruschetta, etc.

Serve at room temperature, or slightly warmed (20 seconds in the microwave) and pour the red wine with profuse abandon. 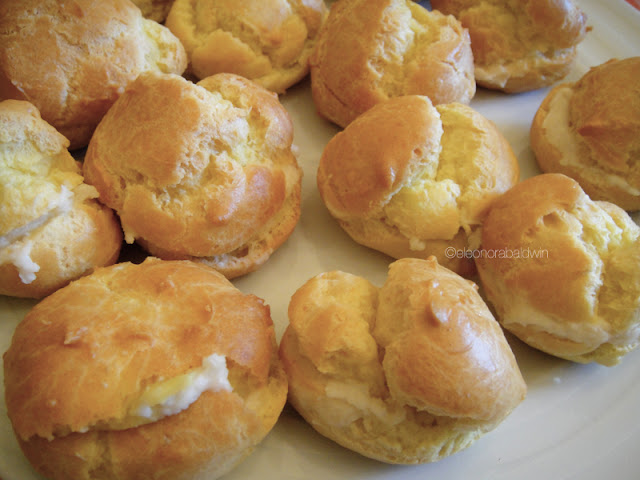 Another easy filling (which doesn't need cooking) is a blend of equal parts cream cheese and Gorgonzola. Dreamy.

We're talking gourmet comfort food. This is a rich Venetian springtime soup made with the slow cooked technique needed for making risotto, and freshly harvested tender baby peas. I learned how to make Risi e Bisi during one crazy edition of Regata Storica, a few years back. Venezia's historic scull race aboard vintage gondolas, mascarete, sandali and other beautifully ornate antique boats, annually falls on the first Sunday in September, usually messing up Film Festival boat traffic, and leaving stars and publicists stranded on the Lido peer, hopelessly waiting for their Riva motorboat taxi. 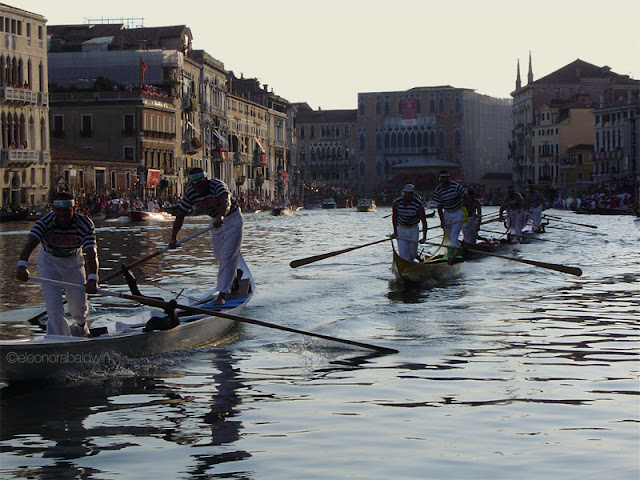 The entire city of Venice and inhabitants of the six sestieri wards infact forget all divas and snob cinema flair, participating instead in loud hollering cheers, drinking and unplanned diving in canals from parked boats, madly rooting for their colorful team of upright rowers.

Here's the risi e bisi basics, as handed down by Angelo, the gondolier who kissed me:

Begin making a green pea broth by cooking the saved shells of the peas in lightly salted water and then saving the strained liquid. For a richer outcome, Angelo suggests to boil the pea shells in chicken broth instead of water.

Finely slice the onion and sauté it in oil and butter with the pancetta in a large pot.

When the onion tans, add 1 handful of rice + 1, per each person, and cook, stirring constantly. Do this until the rice is translucent (about 5 minutes).

Here comes the fun part: add the green pea broth one ladle at a time, stirring constantly. When you see the rice has given off some starch and looks half done, add the peas.

When the rice is al dente, remove the pot from the stove, stir in una noce di burro (a gob of butter the size of a walnut) and a few tablespoons of grated Parmigiano. The recipe calls for flecks of flatleaf parsley, but if you've been reading this blog long enough, you'll know I'm not super keen on the herb.

In this recipe the rice should be cooked all'onda (behaving like a wave), in other words creamy and moist, rather than pudding-like firm, like regular risotto. You eat it with a spoon rather than a fork...