Yes, exactly what the title says: a true carb fest. I can hear you moaning, "overkill!" – but no, this is a simple and delicious combination. As far as pizza sold by the slice goes, Rome is unbeatable, and in matter of toppings a classic is pizza con le patate, pizza with potatoes. Unlike the round pies normally served in pizzerias, pizza al taglio is baked in electric ovens in large rectangular or oblong shapes, which are then cut in squares and sold by weight. 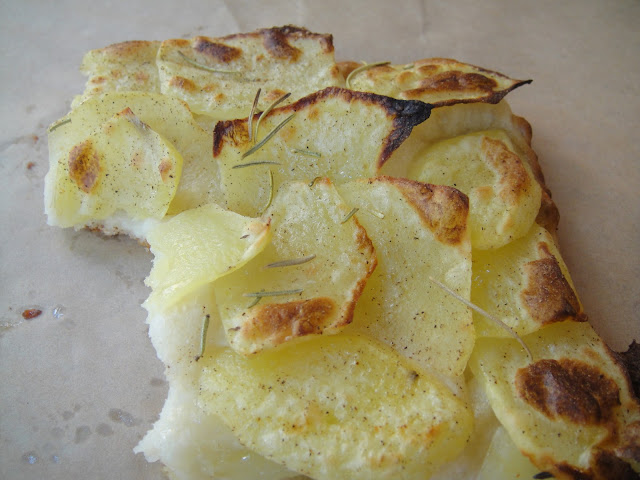 I've recently had the opportunity to organize a series of food talks with dining business entrepreneurs, and on one of these, I had the chance to make the acquaintance of one of Rome's top pizza gurus, Gabriele Bonci. Inventive and outspoken, Bonci has revolutionized the Rome pizza scene with his gourmet creations, sold in his minuscule Pizzarium pizza shop near the Vatican, and now busy with several other enterprises, like the No.Au. eatery, and a newly inaugurated bread and pastry bakery Panificio di Bonci. While researching his profile for the interview, I came across his published book, and in it I learned many things, above all I found the formula for making awesome homemade pizza.

What I was baking before was okay, but something else... it somehow never excelled beyond either a doughy fluff, or an often too crisp focaccia flatbread, that would inevitably sog under the wrong combination of moist ingredients, and that once baked in the oven, changed the nature of the pizza entirely. 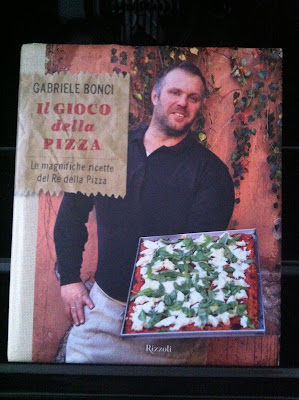 After reading Bonci's book, and learning about kneading properly, leavening, folding and leavening again, and how to prepare the dough for the oven (plus a variety of different toppings and techniques) a new universe of pizza making (and eating!) opened up. The paramount importance of basic doughs, the variation in results that different flours yield; and most of all, how natural yeasts and lievito madre sourdough starters, weather conditions and mood can affect a pizza, have trained me to bake homemade pizza in a whole new way.

This is Bonci's recipe for pizza with potatoes, and it differs from what is normally found in most pizza al taglio joints (see photo above). Very few, good ingredients create the topping, and this allows the flavor of the dough to really shine through as a main ingredient, and not merely as an edible starchy surface where toppings are laid. The potatoes are not sliced and roasted, rather are pre-boiled and crumbled on the top. But I'm getting ahead of myself.

Here it is: a wonderful, melt-in-your-mouth potato and mozzarella pizza. Warning: the procedure for the preparation of the dough is long and labor intensive, but well worth it. Trust me.

In a large mixing bowl, mix flour and yeast with a wooden spoon. Slowly add the water and start mixing with your fingers. Messy and sticky, but keep going. Only when the dough has transformed into a solid mass, is it safe to add salt and olive oil (salt offsets the effectiveness of yeast). Don't worry about clumps, during the first rise period, leavening will take care of these naturally.

You'll need a numer of clean mixing bowls, grease the next one with olive oil and place the dough ball in the middle, cover it with a kitchen towel and leave to nap for about an hour.

During the second, lengthier rise, the dough will double in volume, so your next bowl will have to be quite large. Grease it and place the dough-ball in the middle, gently caresse the surface of the dough with some olive oil and cover with a clean kitchen towel or plastic wrap. Place in the mild temperature compartment of the fridge for 18-24 hours, and be patient.

The next day, take the raised dough out of the fridge and let it sit for about 10 minutes at room temperature. Given that the pizza dough has now developed in mass, you'll have to plan out quantities wisely. For an average oven pan, you'll need to cut up the dough in 350 g sections (13 oz). Use a dough cutter and avoid handling the dough with your hands too much. Another 90 minute rest and you'll be ready for the trickiest part.

You've nurtured and cared for the dough for the past 24 hours, ruining it now with violent moves, rips and tearing of the gluten tissue would be a sin. Generously flour your work surface and start working the dough gingerly, using only your fingertips, by molding it into a rectangle or whatever the shape of your oven pan. Delicately place the dough in the greased pan, and drizzle with a thread more olive oil, (always a good idea, regardless of the topping).

Break up the mozzarella in shreds, pat it dry with a paper towel, and sprinkle evenly on the pizza dough.

Peel the boiled potatoes and once cool enough to handle, crumble them coarsely with your fingertips over the shredded mozzarella. You can add a few rosemary needles, if you like.