Some time ago I published a recipe for Eggplant Vegetarian Meatballs. Their meaty flavor and wonderful texture lent the vegetarian preparation a wonderful structure and complex taste. In the northern hemisphere however, eggplant only grows naturally in summer, so I decided to make a winter version of this recipe, using broccoli as the base.

Perhaps the only negative associated with broccoli is the foul sulphur smell released during cooking. But if you know a little chemistry –– or listen to your Nonna's advice –– there's a trick to avoid that vile smell.

Want to know what it is? Learn how to make winter meatballs with broccoli first.

I cook my broccoli vegetarian meatballs in the oven, but you can opt to fry them in a pan. In that case, add 3 tbsp of peanut oil to your ingredient list.

Trim the broccoli without discarding the leaves, they are highly nutritious and tasty.
Steam the broccoli and potatoes until fork soft and allow to cool briefly. To avoid the nasty smell of cooked broccoli, all you have to do is add the juice of 1 lemon to the steamer!

In a mixing bowl and using the tines of a fork, smash the broccoli and potatoes, combining them. Add the egg, the cheese and 3 tbsp of breadcrumbs.

Shape balls the size you want using your wet hands and flatten them out slightly.

Dust the surface of a flat dish or tray with breadcrumbs and your assortment of seeds, and dredge the vegetarian meatballs. 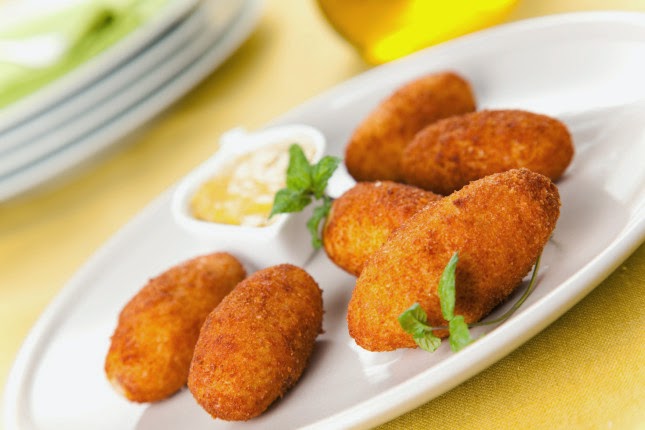 Last week I posted the recipe to one of my favorite cod recipes, brandacujùn (a Ligurian shift on brandade) promising to follow it up with a leftover recycling solution.

If you've been following this blog for a while, you'll know how obsessed I am with not letting leftover food go to waste, and how it's traditional to re-employ yesterday's meals. This is such an important part of my Italian culture and upbringing, and it therefore plays a huge role in my cooking.

When I make excess amounts of risotto, in fact, I use the surplus to make Riso al Salto (a rice frittata) or Arancine (fried risotto balls). If remnants of my loaf of wholegrain bread were not all used up to make breadcrumbs, crostini or toast, I can transform them into bread pudding or Pappa al Pomodoro soup. Leftover meat (cooked and raw) goes straight into meatballs, and extra cheese becomes Frico.

Since when I make brandade I end up with lots of leftovers, my son can rely on his favorite snack: brandade croquettes. These are a great antipasto appetizer but can double as a sinful main course.


Mix the dried herbs, cornmeal and the breadcrumbs, and proceed setting up your dredging station. Prepare three large bowls: one for the beaten egg(s) - quantity depends on how many croquettes you obtain from your leftovers; one with the flour, and one for the flavored breadcrumbs.

Take the leftover brandade out of the fridge and immediately shape into 5-cm (2-inch) bullets or quenelles. Roll them in the flour, quickly dip in the beaten egg, and lastly in the breadcrumbs to coat well. This procedure assures a golden, flavorsome crust and a soft, pillowy filling.

Work quickly with cold ingredients in order to produce a firm, crispier croquette, and fry in small batches – not more than 2-3 at a time – in plenty of hot vegetable oil until uniformly golden (about 3-4 minutes).

Blot on paper towel and serve immediately with aïoli or plain mayonnaise for dipping, if you like. As with all things fried, and in this case fish-based, I would suggest pairing this dish with a sparkling white, like Franciacorta.

Brandade is a fancy French word for pureed salt cod. Originally the cheapest ingredient around, poached and deboned salt cod that's been reduced to a pulp, often combined with potatoes pushed through a ricer and stirred with olive oil and garlic, is probably one of winter's best comfort foods. And despite its humble origin, with the culinary adroitness of the French, the concept behind this dish has been refined since its inception into a fine (and costly) delicacy.

The birthplace of this preparation is however disputed. Some say Nîmes in France is the world capital of brandade, while others in the Veneto region maintain "baccalà mantecato" came first. But my Ligurian friends declare their "brandacujùn", made with dried cod instead of salt cod, is the culinary ancestor of this delightful recipe.

Whatever the genesis, I love the pillowy combination of cod and potatoes, and enjoy it often smeared on crusty bread that's been generously rubbed with garlic. The flavor is delicate and the texture creamy, and I serve it to those guests who are worried about fish tasting too... "fishy".

The problem is I make way too much of it. When purchasing dried cod, it's never possible to just buy a small amount, the darn planks are huge! And so I end up making ginormous quantities and am left with lots of brandade leftovers. A great way of recycling leftover brandade is making my son's favorite croquettes, which I roll in small bullets, dredge in breadcrumbs and quickly fry in vegetable oil.

But before we talk leftovers, here's how to make easy brandade from scratch:


Cover the cod in unsalted water and boil for 30 minutes. Lift out of the pot and allow it to cool before deboning, but save the cooking water for the potatoes.
Boil the potatoes in the cod water and when they are fork soft, add them to the deboned cod.

Now you can proceed in two ways: a quick and easy one, or the original method, which is more labor intensive.

Easy method (the one I use): Coarsely blend everything in a stand mixer, adding the minced garlic while pouring the olive oil, and finishing with a lashing of pepper and seasoning with salt at the very end if necessary.

Original method: Cover the pot and, armed with hefty kitchen towels and good muscles, shake the pot (the French term 'brandade' and the verb "to brandish" share the same root) until the ingredients are reduced to a soft emulsion!