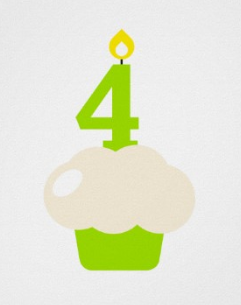 Thanks to blogging, and all that has happened since – and perhaps thanks to – that fortunate night when I wrote my first post, a lot has changed in my life. Through blogging and my activity on the social media, I have
I think I deserve to take the day off to celebrate.

This will probably happen in the company of my son, the inspiring muse behind all my food and lifestyle writing. Had it not been for his extraordinary eating requests, and his extensive naps, I never would have started blogging in the first place.

Barring rain, I will be spending Jan. 24 outdoors and then seated at a table, eating spaghetti aglio olio e peperoncino, as a tribute to the luck this long and unpronounceable recipe name has brought me.

Although the best spaghetti AO+P are the ones made at home, in the old grubby frying pan with the good olive oil, young garlic and the chili peppers from Calabria, I won't be cooking it on this blog's birthday, though. When I say "day off" I mean it. I'll decide where to dine on perfectly slippery, spicy, garlicky spaghetti on the day, with only a lazy stroll between me and the eatery's doorstep.

There are good trattorie that occasionally make this dish, but since it is one of those homestyle fixes everyone knows how to prepare (even Italian men!), it's hardly ever a restaurant menu item. Good thing is no trattoria or other informal osteria will ever raise eyebrows if you ask for a plate of AO+P, they might not even charge you for it. 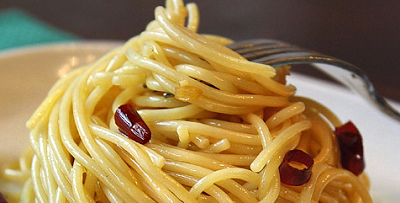 This is just a small list of places where I can usually score some good Spaghetti Aglio, Olio e Peperoncino in Rome. Feel free to add names.

Rome is a city of meat-eaters. But some top-notch vegetarian spots are beginning to make a mark.

The average Italian is a carnivore, Romans in particular. Veal and beef are the norm as main courses and in pasta sauces. But the city also has plenty of vegetarian options, mainly because mainstream Italian cuisine, which hasn't changed much since the 19th century, leans heavily on vegetable, pasta and dairy products. 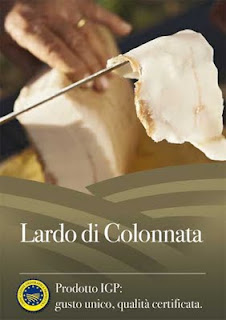 Pasta butter and anchovies, or I take it all back, Baccano.

Summer. It's hot and muggy in Rome. The baby sitter is late and I have limited cab fare in my wallet, but I have to attend a new restaurant opening in Trevi for a story. The horde crowding both entrances is ridiculous. We make it inside, pushing through throngs of puffy lipped wannabe tv presenter girls and UVA tanned blokes with plucked lady eyebrows. It's 9 pm and it's hot, too damn hot to be this crowded. 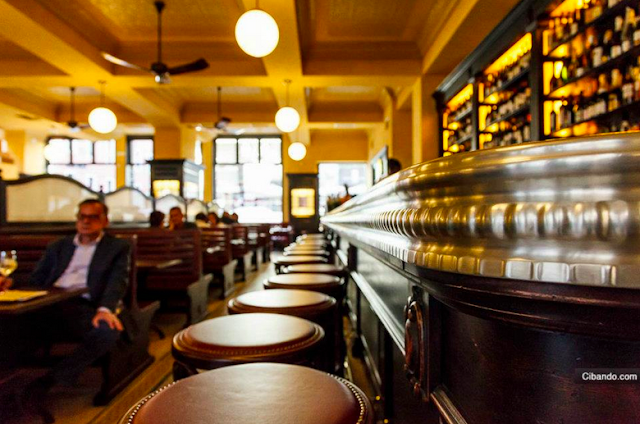 I grab a glass of white wine from a roving tray, but can't make the oyster platter in time: a million hands reach forward and I've never had long arms. I manage to sieze a fried mozzarella ball from an abandoned corner of the bar, and bump into a couple of frazzled friends. So I find out the reason the place is so packed is that it's serving two social events in one night: a birthday party of a young actress (attracting fauna mentioned above); and the actual opening of the restaurant (attracting multitude of foodies, bloggers, journalists and dining celebs elevated to stardom status).

The decor is French inspired, and quite nice. Waitresses are all pretty, dressed like 1940 chamber maids, sporting LBDs, black pumps and a white sexy apron. The fourth wall in the kitchen is made of glass and overlooks the dining room. The tiles, newspaper racks and leather booths spell bistrot without italics. Despite the attractive ambiance, thanks to the chaos, I make a mental note to never come back here again. 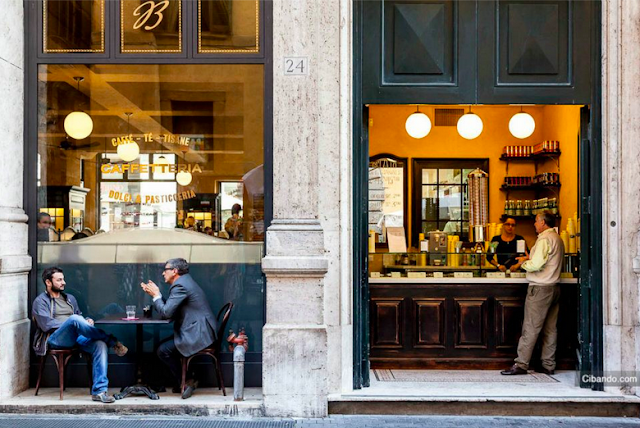 This was the first impression Baccano made on me. But it was silly of me to think I could understand the true nature of a place on its opening night. Too over capacity, too soon in the trial stage, and too damn hot. On my first visit I hadn't tasted the food, I did not have a chance to really get a feel for the place, I did not peruse the wine list, I didn't even get a chance to take a look at the menu!

Today I have to strike that first impression, erase it completely. One because it was based on all the wrong elements, and two because on my second visit I actually ate well.

So here I am at 1pm, willing to rectify my bad judgement, with a reservation at Baccano. Reason is I absolutely have to taste the place's forte: pasta with butter and anchovies. "Burro e alici" is a classic Rome cucina povera snack: a morsel of crusty bread meets a curl of butter and an anchovy that's been steeping in olive oil. That's when life suddenly smiles at you.

So when browsing the restaurant's lunch menu online I read that Baccano's signature dish – besides juicy 7oz burgers, eggs with shaved truffle (in season), salads, sandwiches, and daily specials that include foie gras, bollito misto and tripe – was tagliolini with Échiré butter and Spanish salted anchovies from the Mar Cantábrico, I had to go back for a second opinion.

Creamy, savory and perfectly al dente. I sopped my plate with bread and it returned to the kitchen clean. It was so good that I had to replicate it immediately at home. It turned out great.
I've been silent on this blog for 6 months, and now 2 recipes in 4 days. Don't say I don't spoil you. Two recipes in 4 days. I must be crazy.
Here is the recipe. 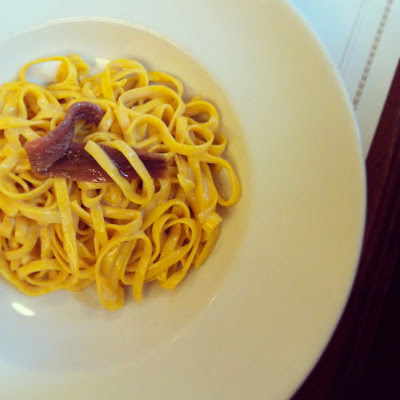 Tagliolini burro e alici like you find at Baccano
320 g (10 oz) fresh tagliolini (you can make it from scratch with this recipe)
8 oil-packed anchovy fillets + 1 for garnish on each plate
120 g (1 stick, or 1/2 cup) unsalted butter
Extra virgin olive oil

Once the pasta dough has rested and is ready to be rolled, dust your work surface with some flour or polenta (cornmeal) and use a well-dredged rolling pin to work the dough to a thickness of about 2 millimeters (about 1/8 of an inch).

Now roll up your flattened dough like a burrito and cut 1/2 cm slices, about 1/4 of an inch. Unravel the coils, dust with a bit more flour or polenta, and shape into nests the size of an egg. Allow a couple hours to dry.

Cook your fresh homemade pasta in plenty of lightly salted water at a jacuzzi-type rolling boil. Stir with a wooden spoon or a long fork quite often. This will ensure the pasta to remain springy and not clump together in clusters during cooking.

In a large saucepan melt the butter with a drop of olive oil and the 8 anchovies over very low heat. The butter has to slowly melt without ever bubbling, while the anchovies render a savory, creamy texture to the flavor.

When the pasta is al dente, drain it saving plenty starchy pasta cooking water, and pour the noodles straight into the condiment saucepan. Stir over mild heat to blend well, slowly adding a ladle of cooking water, to obtain even more creaminess.

Plate and garnish with an anchovy fillet on each heap.
Yields 4 servings. 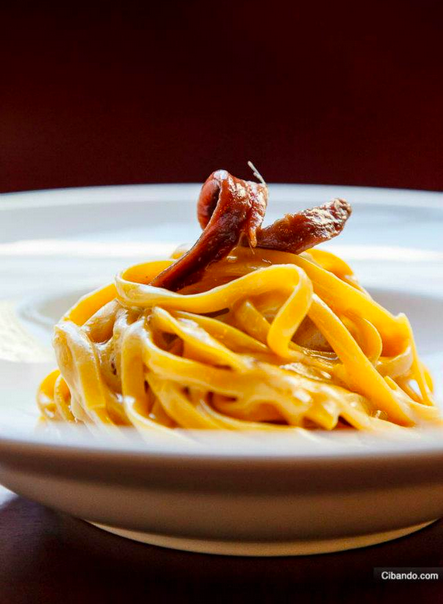