Back to School Meals: End of Summer Vegetable Flan 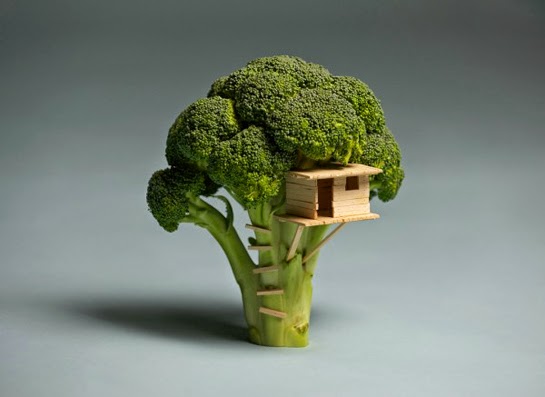 My eight year old gourmand child, whom I've raised to appreciate chicken liver crostini and puttanesca, spaghetti with clams and octopus salad – while still ignoring Happy Meals – has freed himself of my apron strings.

Yesterday, faced with yet another bowl of zucchini noodles with basil pesto and a serving of eggplant al funghetto – sautéed with tomato sauce and garlic – he said no. His sophisticated palate is evolving and so is his personality. Normal. But I didn't see it coming.

I had been noticing some recent changes: making his own bold decisions when picking outfits, and becoming more and more prudish and reserved during shower time. OK, these are clear symptoms of growth, independence, character. But shunning my tapenade? Doesn't that happen later?

It's hard to please growing kids at the dinner table, even the more cosmopolitan food snobs. We Italians have an advantage in that sense, because we wean our children off mother's milk with strained vegetable consommé, pureed carrots and potatoes, and the first solid protein we feed them is steamed sole fish drizzled with olive oil. Junk food, sodas and fried fish sticks come into the equation way later, and certainly not in grade school.

I can never forget the handshake I got some years ago from the executive chef at the Monterey Aquarium's own Portola Cafe for ignoring the kids menu and ordering instead salmon fillet, broiled asparagus and abalone on the shell for my toddler. "We're Italian," I replied. "This is how we feed our kids back home."

There are picky eaters and kids who will by default not ingest anything green. I guess I've been lucky because my child was never scared of tasting and experimenting with new flavors. His play date Giulia, one year his junior, still can't fathom eating un-peeled tomatoes and grapes. She may shadow my son and ask to be served some of his minestrone, but will inevitably leave it in the bowl, untouched. My boy instead proudly showing off his alimentary prowess could gorge on all the available langoustines on the Disneyland Paris buffet spread, and wipe his cuttlefish ink risotto plate clean.

But, apparently those days are over.

Zucchini, eggplant, broccoli, Brussell sprouts and all kinds of salad are now officially off the list.
There is a strange aversion to mozzarella, but an ongoing flirtatious relationship with burrata.
He's asked me to please stop serving him hummus.
Or cauliflowers.
And he said I can avoid the trouble of putting dandelion greens in his plate.

So now I'm screwed, because I still want him to eat healthy, local and seasonal food, but his narrowing diet and broadening aversions are making dinner choices slimmer. Soon he'll be asking for a Big Mac, so I have to start finding new and interesting ways to push embargoed food back on his plate.

One of these solutions I found on an Italian website, it's perfect for this end of summer, back to school climate and it employs vegetables and cheese, therefore constituting a balanced but complete vegetarian meal. In my version I used what I had in the house, that is bell peppers, zucchini, potatoes and two kinds of cheese, but these vegetable flans can be made with virtually every vegetal of your choice.

Boil the potatoes with the skins on in lightly salted water until fork soft (about 30-40 minutes). I use a pressure cooker which cuts the cooking time by half.

In the meantime cut the bell pepper and zucchini, chopping them in same size mince. Preheat oven at 200° C (390° F).

Film a large pan with 3 tbsp of olive oil and sauté the bell peppers for 2 minutes, fold in the zucchini and cook for 10 minutes. Season with salt and pepper, and a tablespoon of triple tomato concentrate diluted in 1 ladle of potato cooking water, simmering over low flame for about 5 minutes. Consider the vegetables must maintain some crunch. Set aside to cool.

Drain the potatoes and force them through a ricer (or a hand-powered food mill, or using the tines of a fork) into a large mixing bowl. The advantage of the ricer is that the skins separate without effort. Add the cubed and grated cheeses and the egg to the riced potatoes, season with salt and pepper, some may want to add a suspicion of grated nutmeg.
Finally fold in the cooled, sautéed vegetables, mixing with a wooden spoon to blend well.

Grease 6 to 8 ramekins with butter, and dredge with the breadcrumbs. Fill each with the mixture to the brim, and top with more breadcrumbs, a pinch more grated cheese and a dribble of olive oil.

Bake for 15-20 minutes or until a golden crust forms on the top. Eating these flans out of small ramekins makes it more fun for the kids, but for convenience sake you can grease and dredge one big baking dish, and thus obtain a "gateau".

I made this tonight. And guess what? My son asked for seconds. 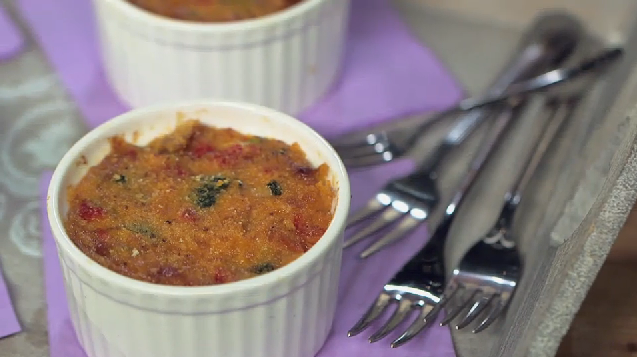 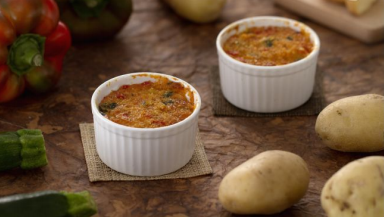