I opened the windows to air out the apartment early this morning. It must have been seven. The crisp spring air wafted in and brought with it a curiously untimely smell of... roasted bell peppers. Who the heck roasts bell peppers at 7 am? - I wondered, as I peered out past the geraniums on the window sill.

But then I remembered, today is a holiday. On this day the city of Rome celebrates two very important fellows, St. Peter and St. Paul. Hence the bell peppers.

The Festa di San Pietro e Paolo, or properly the Solemnity of Saints Peter and Paul, is a holiday commemorating the martyrdom in Rome of the apostles Saint Peter and Paul of Tarsus, observed on June 29th. The celebration is of ancient origin, and in Rome it is a closely observed holiday. All business shuts down and people have the day off work. Picnic lunches are packed and taken to nearby beaches. Hence the bell peppers. 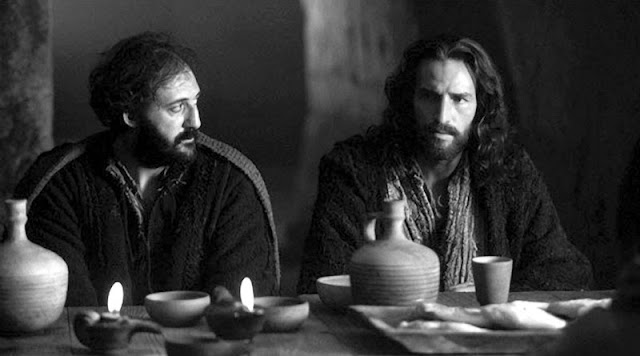 Saint Peter is also known as Ben-Yonah/Bar-Yonah, Simon Peter, Cephas and Kepha (Kepha and Cephas כיפא are all words that mean 'rock') - his original name is Shimon or Simeon. In Greek Πέτρος, Pétros also means rock. Pietro (in Italian the word pietra means rock too) was one of the Twelve Apostles, chosen by Jesus from his first disciples. Pietro was a Galilean peasant who ran a fishing business. He was assigned a leadership role by Jesus (Matthew 16:18), and is always in the lists of the Twelve Apostles and is also frequently mentioned in the Gospels as forming with James the Elder and John a special group within the Twelve Apostles, present at incidents at which the others were not, such as at the Transfiguration of Jesus.

Saint Paul, also called Paul of Tarsus (whose name in ancient Greek was: Σαούλ (Saul), Σαῦλος (Saulos), and Παῦλος (Paulos) was a Pharisee who called himself the "Apostle to the Gentiles." According to the Acts of the Apostles, his conversion took place on the road to Damascus as he was en route to persecuting more Christians after having slaughtered many in Jerusalem. Paolo's influence on Christian thinking arguably has been more significant than any other New Testament author. Paul's letters are largely written to churches which he had founded or visited; he was a great traveler, visiting Cyprus, Asia Minor (modern Turkey), mainland Greece, Crete and Rome bringing the teachings of Jesus of Nazareth with him. His letters are full of expositions of what Christians should believe and how they should live. He does not tell his correspondents (or the modern reader) much about the life of Jesus; his most explicit references are to the Last Supper, the crucifixion and resurrection. 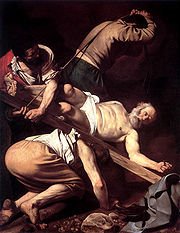 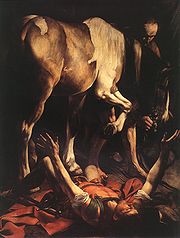 Roman Martyrology (a rather and extensive but not exhaustive list of the saints recognized by the Church) assigns June 29th as the feasts day of both Peter and Paul. St. Augustine of Hippo says in his Sermon 295: "One day is assigned for the celebration of the martyrdom of the two apostles. But those two were one. Although their martyrdom occurred on different days, they were one."

That smell of bell peppers drifting in my kitchen as I brewed breakfast espresso, brought to mind a summer recipe my mom used to make when packing a basket with goodies before hitting the beach at Ostia or Fregene every June 29th. Mamma's peperoni ripieni is a complete meal in itself, the perfect Mediterranean meal combining pasta and a seasonal veggie, all in one baked delicacy.

That premature lunch aroma made me want to make some today, to bring to my friend Barbara's pool, where our kids will be splashing around in her garden, water wing-clad, squealing with prune fingers and and eyelashes clustered. 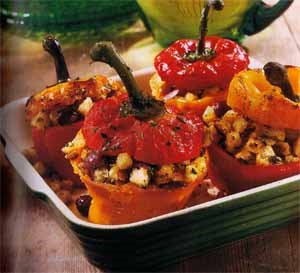 My mother's recipe for these refreshing Neapolitan stuffed bell peppers yields 6 servings. Why don't you celebrate San Pietro e Paolo with us today and make some yourself?

Prepare the peppers by leaving them whole and cutting around the stems, shaking out the seeds, washing them, and patting them dry. Next, broil them over the stove top flame to blister the skins, making sure you don't burn your hands. My mom's failsafe system is to then cool them off for a few minutes in a brown paper bag, the skins will peel right off: gently rub the bell peppers with a towel, taking care not to pierce the flesh. If you wish to leave the skins on you can, but in this case you'll have to increase the final baking time to an hour.

Sauté two cloves of garlic in their "shirts," that is smashed and with skins left on, in 1/4 cup olive oil, removing and discarding them when they have browned. Stir in the tomatoes and simmer for 15 minutes, then add the olives and capers, lower the heat, and cook for five more minutes. After removing the pot from the stove, stir in the anchovies, parsley and pepper.

Cook the pasta in lightly salted water until it's half cooked, drain it, and season it with the tomato sauce.

Divide the filling mixture into 12 parts and stuff the peppers. Put them in a well-oiled ovenproof dish, drizzle with olive oil to taste (I go with a lavish hand) and roast for 30-45 minutes (or an hour if you choose not to peel the peppers).

They're wonderful served cold, and even better the next day. They'll go very well with a chilled fruity white wine, for example Vernaccia, Fiano or Vermentino, and a crisp iceberg salad.