This evening I dined in a restaurant whose first menu entry for antipasto was a dish called Elogio del Porco, which roughly translates to ‘Plaudit to the pork.’ Although generally eaten as antipasto, salumi–or cold cuts–are a selection of cured meats often known also as "affettati misti" that can be enjoyed freely at any point of the meal. Salumi span a wide assortment of (generally) pork-based cured meats, and for a clear definition of salumi all you really have to do is eat some handsomely folded in a warm bread roll. Like this. 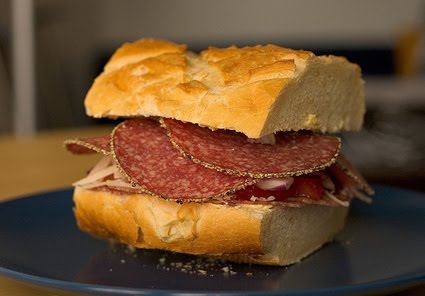 My favorite specialty store to visit (much more than a jeweler or a haute couture boutique) is a salumeria, a local Italian deli. This especially when I'm in Rome's centro storico, the central old part of the city, where the Roman deli is commonly called a pizzicheria, presided over by a pizzicagnolo, an artisan managing a sharp slicer, fragrant specialties and palatable delights. Another name for this exquisite little shop of wonders is Norcineria (from the town of Norcia, renowned for its cured meats), where the person behind the counter is a Norcino. Gastronomia or Alimentari–other ways of calling a salumeria–are places where one can also purchase a wide range of prepared gastronomy items, from salads to pre-cooked dishes, dry goods and canned delicacies. 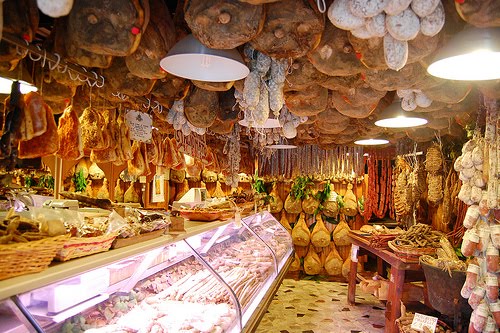 Whatever the name, the smell in the store is divine and the arrangement of cheeses and cold cuts is a work of art, balance, and efficiently creative use of space. When the salumeria is strategically located next door to a fornaio, there is no way out: purchase some warm bread, slice it open and fold in some freshly cut cheese or cured meat, or a mix of both, and enjoy your life then and there. When you are done, crumbs littering your chest and smile widening on your face, you can walk another few steps to the nearest bar and get yourself un caffé.

Some of the distinctive cold cuts that fall under the generic domain of Salumi are porco-based, but not all. There are hundreds of types of salumi found in Italy, some of the most popular are:

Bresaola is salt-cured beef typical product of the Alpine valley Valtellina. Bresaola is usually served finely sliced, and seasoned with olive oil, salt, and pepper, and lemon juice. Some like to add flecks of Parmigiano. I personally serve mine dribbled with pink grapefruit slices, olive oil, freshly ground black pepper and a little arugula. 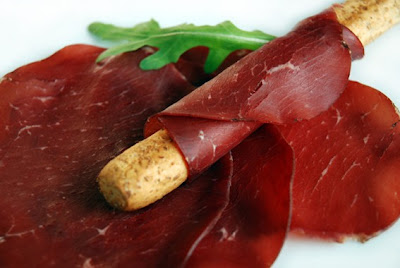 This lean and rosy, refined variety of raw prosciutto ham, is made with a part of the normal ham cut closest to the pig's rump. The name refers in fact to the animal's culo, a vernacular term for 'rear end.' Universally considered superior, aged culatello has a clean, delicate flavor. It is highly prized and priced, but worth every penny it's worth. 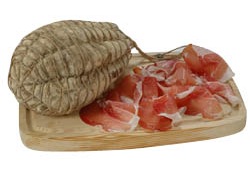 This is a Tuscan fennel seed flavored salami that is aged less than regular salami, it is more of a soft sausage. Legend has it a thief stole a salami and hid it in a bushel of fennel seeds while chased down by guards. When he returned to pick up the booty, he found the aroma of the herb had seeped int the cured meat. 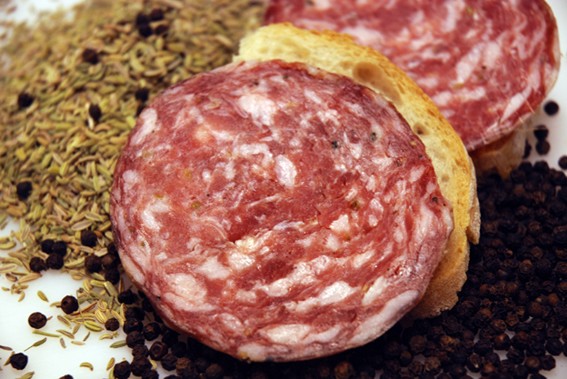 Galantina is a delectable meatloaf made from boned poultry, stuffed with ground meat, hard boiled eggs, giardiniera, ham, truffles and other diced ingredients, pressed into a cylindrical shape, and poached in an aspic-like stock. 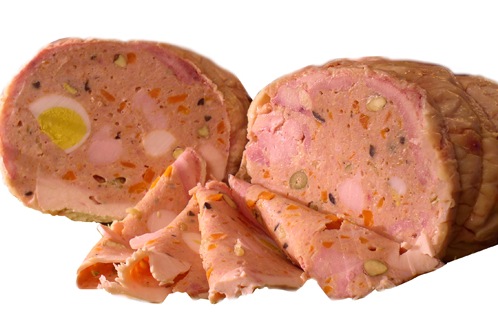 The word translates as lard, and that's what this is, thick fat with some thin streaks of pink meat, cured with herbs, pepper, and salt. The best-known Italian lard is from the town of Colonnata, which is a small village perched on a ridge between two marble quarries in the Apuane Mountains above Carrara (the place where Michelangelo went to shop raw material for his sculptures).

Lardo can be used as a flavoring ingredient in other dishes (thinly sliced and wrapped around a filet mignon, for example), although it is best served as is, thinly sliced with plain toasted bread. If your cholesterol count can take it, this is one of the finest affettati around.

Rendered lard that's used for cooking as a shortening, is called strutto, and looks like a white paste. 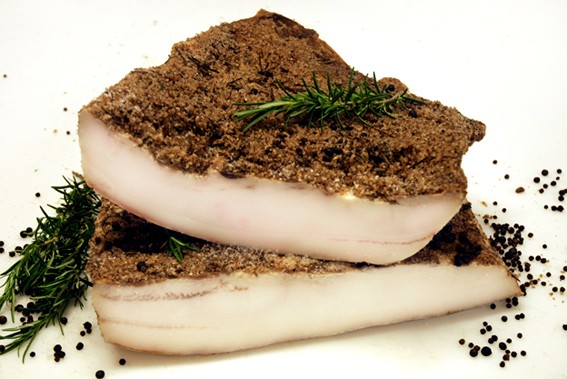 This is a salume made from pork shoulder, which has been trimmed of its fat, slipped into a casing, and then salted and air-cured with herbs and spices, treating it much like prosciutto. It is one of the leanest cold cuts available, and rather delicately flavored. Capocollo, as it sometimes also called, is sometimes marinated in wine. 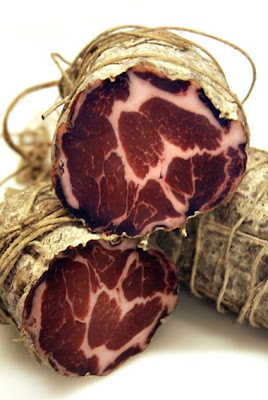 This si a precooked and highly seasoned sausage the size of my den. Mortadella is also known as Mortadella di Bologna, the signature cold cut of the city.

Mortadella is a cooked salume, made from ground pork meat that's been stuffed in a casing with peppercorns, pistachios and cubes of pink fat. The popular bologna is usually sliced and served as a sandwich filler. I usually have my pizzicagnolo carve a thick 1-inch slice and then cube it. I place the cubes in small bowls scattered around the house and nibble them during mid morning housework. And mortadella rules stuffed in warm pizza bianca. 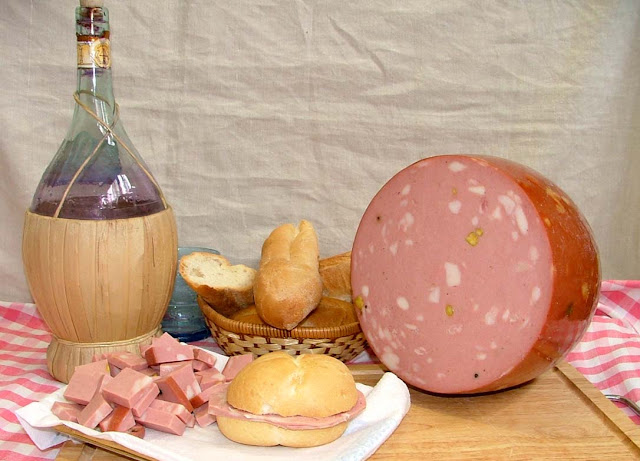 This is a soft, spreadable Calabrian sausage that's been ground with tons of spicy red pepper, which lend it bold red color and a fiery flavor. The best way to enjoy 'nduja is scooping it out of the casing with a spoon, softening it further over mild heat, and dipping bread or veggies into it. 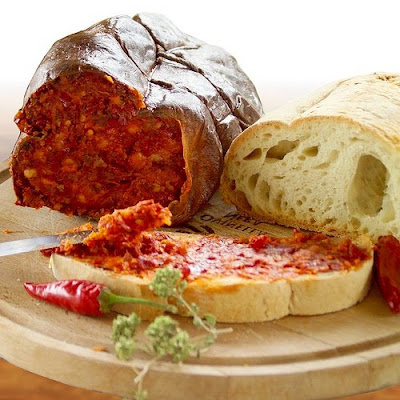 Dry cured pork's stomach meat. Pancia means abdomen, pancetta is also the affectionate name for the sexy pot-belly. Pancetta is made from the same cut used to make bacon. However, pancetta is not smoked, and there's no added sugar in the curing process. 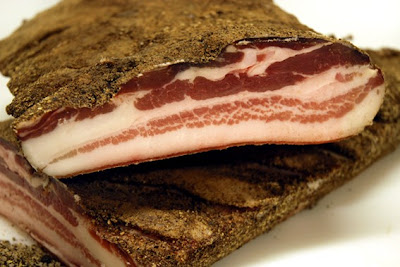 The ingredients are the same, a large boned and bound pig with an apple in its mouth, salt, pepper, garlic and herbs among which wild fennel or rosemary, depending on the Norcino who assembled it. The pork is spit roasted and served sliced, enjoyed with warm Genzano bread and abundant vino dei Castelli which is a table wine made in and around Frascati. 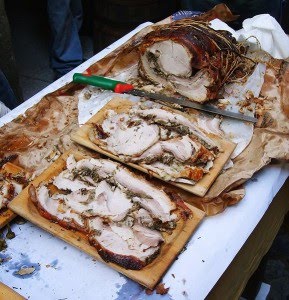 The Italian word for ham is Prosciutto. In this case dry-cured ham, which has not been cooked. Italians call it simply prosciutto, short for prosciutto crudo, which means "raw." Prosciutto is a specialty of northern Italy, the signature Prosciutto di Parma and Prosciutto di San Daniele, are the sweetest, loveliest, melt-in-your-mouth hams in the universe. 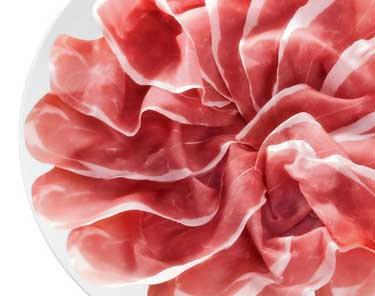 Cotto means 'cooked,' and this what this ham is, the kind you purchase in a deli as a cold cut. Once boned and trimmed, the pork legs are cured in salt, water and fine spiced brines that impart the cooked hams their typical aroma. The pork legs are then put in special molds to be cooked in steam ovens. The ones to choose from the myriad available on the market are the hams containing no gluten, milk proteins, phosphates, or MSG. Sometimes prosciutto cotto is also roasted, a process that provides a delicately sophisticated flavor. 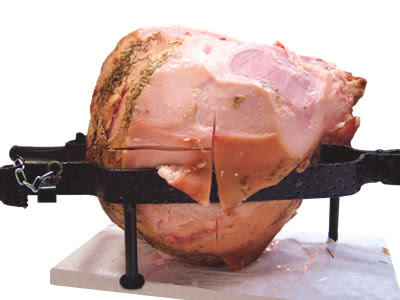 The large sausages made with ground pork and cubes of fat, seasoned with salt and spices, which are then stuffed into a pig's intestine casing are the common definition for salame. Like prosciutto crudo, Italian salame is raw*, with the meat being cured by the salt in the spice mix. Salame piccante, has red peppers in it mixture. In the United States this known as pepperoni, and for some unknown reason it commonly garnishes pizza! The town of Felino, just outside of Parma in the Emilia Romagna region, is famed for its namesake salame Felino. Then there's Salame Milano, a popular standard whose pork fat is finely ground; and there's Cacciatorino, which means 'little hunter,' and indeed tiny he is. Corallina has 3 squared chunks of white fat in the middle of the otherwise fairly lean slice. Ungherese is lightly smoked and ambrosial in sandwiches. So you see, calling it simply salami is an oversimplification. 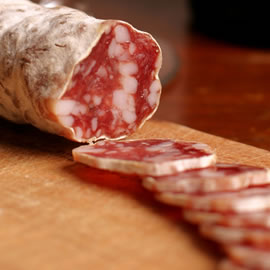 This is a sausage made from leftover pork cuttings, like cartilage and pieces of meat, which are stuffed into a casing and then cooked. The taste and texture are rather particular; people generally make sure their guests like it before offering it. 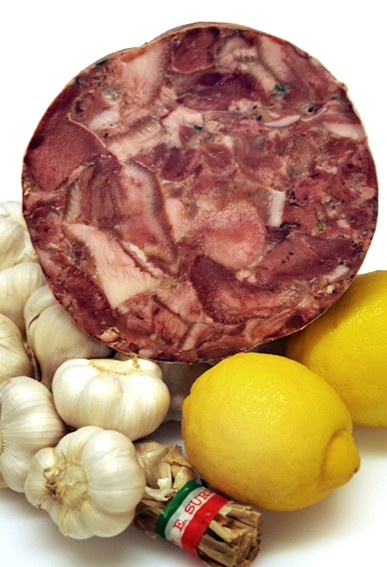 Speck is a salt-cured and cold-smoked ham of the Südtirol, or Alto Adige. The production of Speck remains quite artisanal and has recently obtained IGP status, which means it can only be made in the Südtirol and only following local traditional production methods. Speck is commonly served as antipasto. 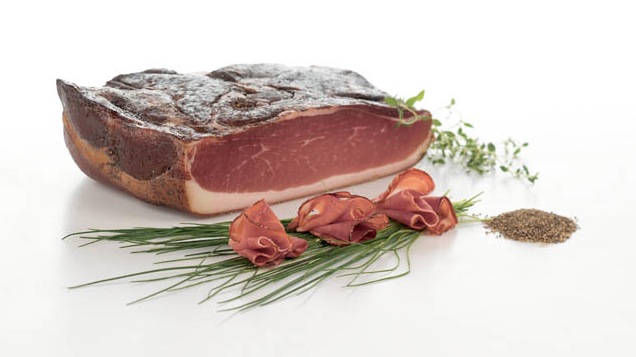 Plaudit to the pork, then. I agree.

*Trichinosis, you wonder? The disease caused by trichinae, typically from infected meat, especially pork, characterized by digestive disturbance, fever, and muscular rigidity? It's virtually unknown in Italy. The salt and the aging process guarantees salumi and other pork-based cold cuts to be a safe food because the salt ties up all the water, making it impossible for any form of bacteria to grow.