I wrote a post on Panelle some time ago, providing the recipe for the typical Sicilian street food fritter made with chickpea flour.

But I had completely forgotten about Cecina! During a recent weekend escape in Lunigiana, I was pleasantly reminded of this local delicacy. And I indulged in the reminder several times a day, to be honest. 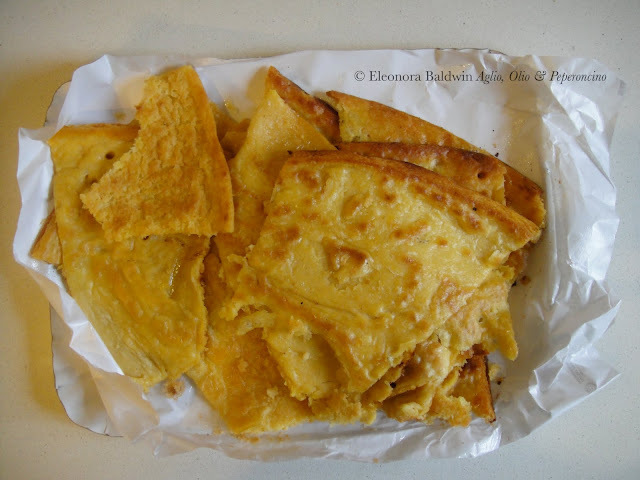 Although very similar in its composition to Farinata–from Liguria–and Panelle, Cecina is not fried like its Sicilian counterpart, rather it is traditionally baked in a large copper pan called 'teglia' measuring over 1 meter in diameter (3 feet). Cecina is commonly baked in a wood-burning oven, but you can also make it at home. La cecina is a simple mixture of water, chickpea flour and salt. The rather liquid batter is poured with a jug into the special teglie and baked for a few minutes until crisp and golden, yet remaining incredibly soft and fluffy on the inside!

It is best eaten piping hot with only a sprinkling of ground black pepper. Its unique crisp/tender texture melts in your mouth and pleasurably scratches your throat at the same time. You can find Cecina sold as a snack all along the Tuscan riviera, in Lunigiana but also in Pisa, Livorno, Lucca and Massa Carrara.

This made me think of other Tuscan street food examples.

I ignorantly thought Rome held supremacy over tripe, but I was wrong. Toscana boasts a long tradition of offal dishes, and a long-established custom of selling them in roadside kiosks. 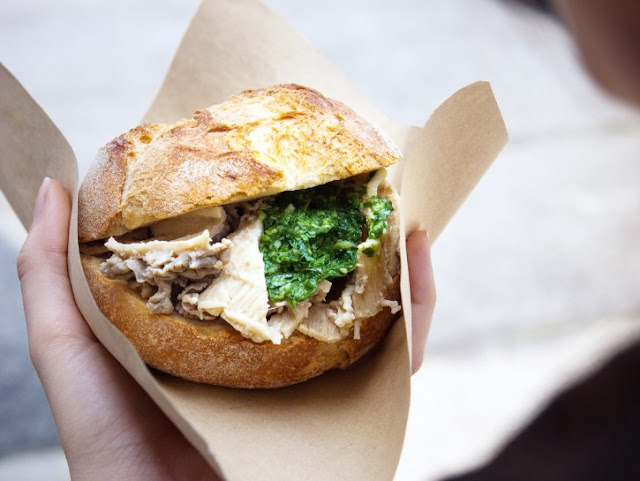 Take the Panino col Lampredotto sandwich, for example. Although widespread throughout the entire Tuscan region, this peasant preparation actually comes from Florence. The fourth and final stomach of common bovines, stewed in a seasoned broth, is shredded and stuffed in a bread roll. When asked if you want your €2,50 sandwich bagnato (wet) you should always say "Sì!" The trippaio preparing it will dunk the top portion of the bread in the lampredotto cooking sauce, and will therefore be served to you juicy, wet and dripping with tasty sauce.

Add on: Thanks to Oriana from Tuscanycious, who reminded me of the mandatory green sauce topping. Here's the recipe. You can also watch their fun video that graphically explains how to make Lampredotto sandwich.

Or the Insalata di Trippa, a cold plate made with boiled calf's tripe, sliced oranges, celery and seasoned with olive oil and cracked black pepper. It contends the title for best tripe dish with local Trippa alla Fiorentina, in which the meatier or spongy, honeycomb part of the stomach lining is cut it into very thin strips, stewed with battuto and tomato and then sprinkled with grated Parmigiano cheese before browning it in the oven for five minutes.

Other trippai specialties (kiosks that sell these snacks) include fried brains–which shortly after the popular cannibal movie saga was aptly renamed "the Hannibal"–nervetti (chopped up tendons and meat from the calf's foot), lingua (tongue), pan co' grifi (a sandwich made with stewed pork muzzle. The chopped meat is ladled into a deep bread pocket called "orcello", used like a soup bowl, and comfortably eaten with a spoon, during your passeggiata. Grifi, or musetto can also be ground into a sausage or used to add flavor to stews and soups); and Animelle, which according to the Italian Culinary Foundation are defined as, "sweetbreads, or the thymus glands of veal and lamb." The testicles (that's what they are, essentially) are skinned and soaked in chilled water for 2-3 hours before being fried and served in paper cones.

Another typically Tuscan snack is ranocchi fritti, or fried frogs (this is turning into a post not suited for those with a delicate stomach). This peasant dish is native to the watery lowlands of western Florence, and the best hunters for the main ingredient were notably kids, who took the chore as a game. The skinned amphibians are left to marinate in beaten eggs, lemon and salt, and then deep fried in vegetable oil.
A few favorite places in Florence banchini dei "trippai" where you can find the dishes mentioned above: