While forced to cope with capricious skin, summer crushes and wild hormonal hurricanes, my Positano teen posse and I would often sneak into the Buca di Bacco kitchen at 10 a.m. while chefs were just beginning their morning shift, and order dozens to go. We would pack our fried goods and dash off to the pier where someone’s motorboat was always ready to take us out to sea for a swim. Hours later–exhausted after diving competitions, snorkeling, trolling for scorpion fish, messy water polo matches and lazy sunbathing in the silence of a secluded cove–wolfing down our sun-warmed palle di riso was the best part of the day. 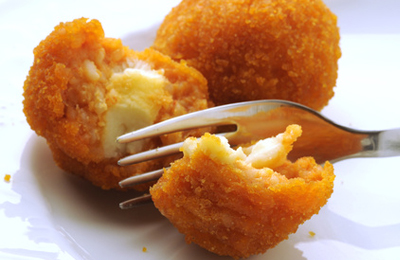 In Sicily they're called arancini, and quite a complex architecture of a snack. Pear-shaped and featuring elaborate fillings, the classic breaded and deep fried rice balls the size of a fist, traditionally have meat ragù, mushrooms and stewed peas in their filling. In other parts of Italy, similar flavor bombs–according to geographical area and assorted filling–go by different monikers: supplì (in Rome) are tomato-flavored and bullet shaped croquettes with a heart of mozzarella; arancini di riso are almost always creamy saffron risotto dome-shaped pucks, or round like oranges (the noun arancino means, small orange). Exotic new fillings in the rice mixture may include the likes of chopped porchetta, a pecorino and pepper mix, and even squid ink.

Palle di Riso–childhood lexicon–are the signature piece of Italian Fritto Misto all’Italiana–a sumptuous mixed vegetarian fried platter. Honoring tradition, I still prepare them according to the long-established Buca di Bacco recipe handed down by chef Andrea Ruggiero himself. I serve them along with a sauceboat of hearty homemade tomato sauce, and three in each plate: a meal.

Combine the chopped mozzarella and a fistful of the grated cheese, and set aside.

Boil the rice in lots of lightly salted water, until it reaches the al dente stage. Drain and transfer to a bowl. Let it cool for 10 minutes, then season it with the remaining cheese, 2 lightly beaten eggs, and the diluted saffron. Mix well and let the thick mixture cool some more.

To make a rice ball, take a heaping tablespoon of rice and flatten it out against the palm of your hand, cupping it to make a hollow. Fill the hollow with a tablespoon of the mozzarella mixture and cover the filling with a little more rice, shaping the ball into an orange. Roll it in flour and repeat the ball-making process, until all the rice is used up.

Beat the remaining 3 eggs, season with a pinch of salt, and dip the balls in them. Combine the cornmeal and breadcrumbs and roll the eggy balls in the mixture, coating them well. Fry the palle in hot oil, until golden. Drain well on a paper towel, and serve them hot with your basic tomato sauce for some serious dipping.


Trivia: The Rome version of arancini is called supplì. These are often referred to as "supplì al telefono" – telephone-style. Do you know why? Because when you bite into a proper supplì, the mozzarella should string out like a telephone chord. The advent of cordless phones has made this old way of saying sadly obsolete.
Pubblicato da Eleonora Baldwin