Such a funny word, stracciatella. A noun that means 'torn to little shreds' [strah·tcha·tell·ah] can be one of three things: a variety of egg-drop soup, a gelato flavor and a type of cheese.

The stracciatella gelato is a delicious and exotic version of chocolate chip ice cream, but this is gelato we're talking about, so creamy and not chunky and made with a white fior di latte (milk) base and minuscule dark chocolate shavings. Hence the name.

The stracciatella cheese is the sinful stuffing for burrata typical of Puglia. It is made with torn pieces of mozzarella and mixed with heavy cream. The outer shell is a pouch made of solid mozzarella, while the inside contains both the creamy stracciatella, which give burrata's unique pulpy texture. Cutting through a fresh new burrata and the witnessing the soft shredded pulp oozing out, is a truly mystic experience. 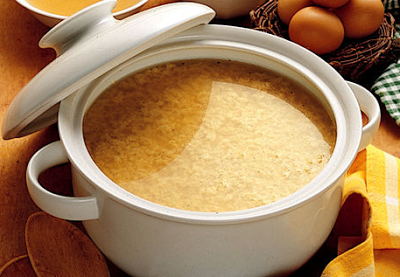 The stracciatella soup is a cucina romana recipe, but this comfort food is made made all over Lazio, which is the region of which Rome is the capital.

The recipe is super easy and brings the magical healing powers of chicken soup to a whole new level.
I once nursed a broken heart on a strict diet of stracciatella (in all three incarnations). Worked wonders.

Lightly beat the eggs in a bowl with a fork, add the grated cheese, a pinch of ground nutmeg and a pinch of salt, and whisk to blend.

Bring the beef stock to a rolling boil. Using a whisk, create a vortex in the broth by swirling in the same direction. Be careful, boiling hot brodo is a bitch.

Carefully pour the eggy mixture in one slim stream into the eye of the whirlpool and keep swirling to break up the stracciatella, reduce the heat to maintain it at a gentle simmer for about 5 minutes, as you keep stirring and shredding as the egg cooks in the broth.

Serve sprinkled with a touch of lemon zest.

Have you uncorked the bottle of Colli Lanuvini?
Pubblicato da Eleonora Baldwin