The bakeries I’ve been banned from in Naples

The city of Naples dates back to the 2nd Millennium BC. Visited for its rich history, jaw-dropping seaside views and stunning architecture, Napoli's full potential is however still underappreciated. 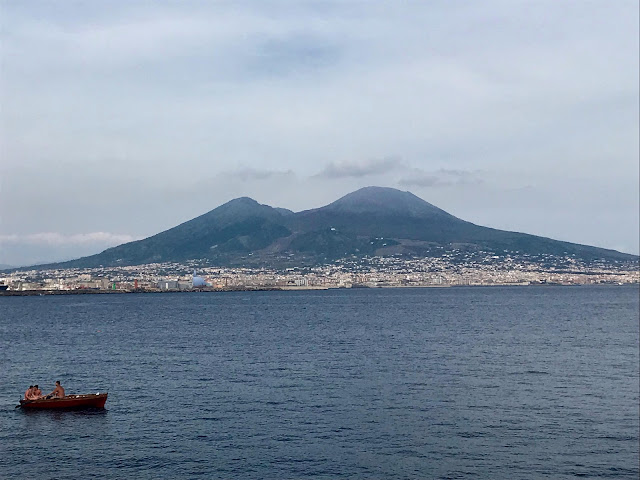 In addition to its elegant buildings, sense of style and historic sites, Naples is a superlative food destination. 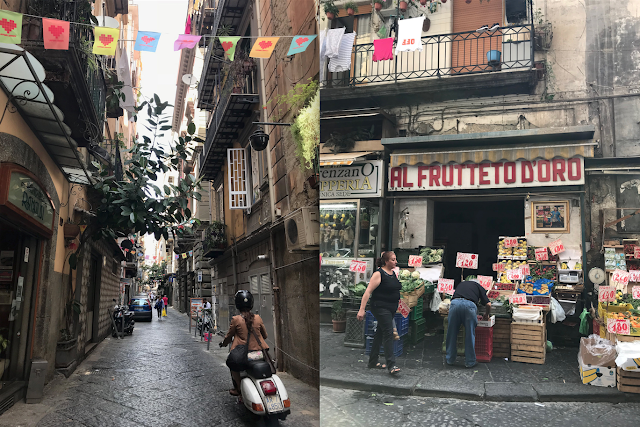 While pizza is the first food-association, the city's pastry scene is equally tantalizing. So much so that my nutritionist has issued a restraining order that prohibits me from returning too often to the city's historical pastry outlets.

Here is a list of bakeries in Naples I've been banned from (and where I nonetheless go as often as I can). 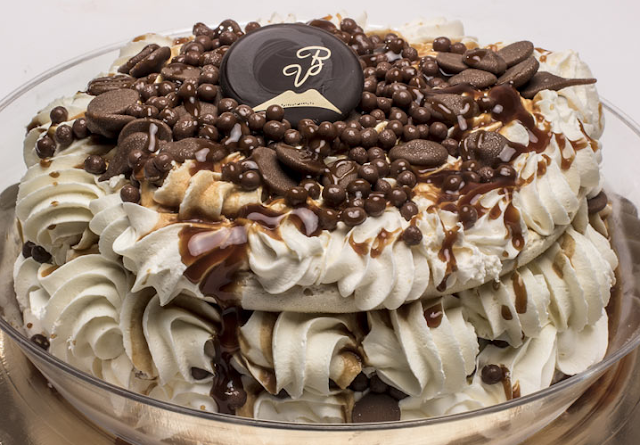 This native Sicilian bakery at its fouth generation since 1925 is where Neapolitans stop for breakfast or to pick up top-notch cannoli, cassata as well as a wide variety of traditional Neapolitan pastries and gelato, plus classic or gluten-free desserts, holiday creations, spumoni and more. My guilty pleasure here is the Mery Mou cake, a caramel and meringue production topped with whipped cream and crunchy chocolate pralines. The variety and the quality of products put family-run Bellavia among the city's best, with four city-wide locations, including one in the Naples Capodichino airport. 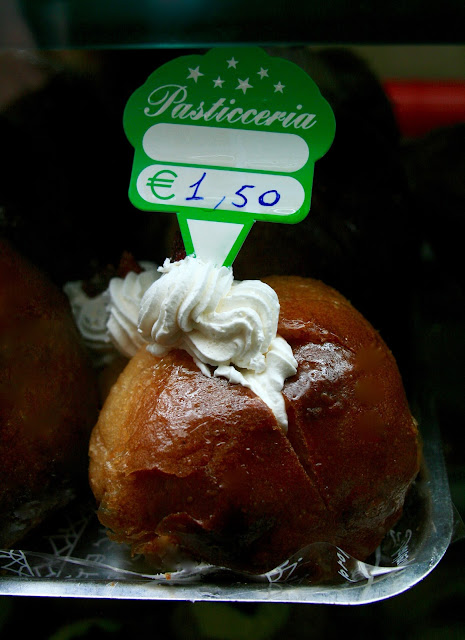 While enjoying a beautiful view of Piazzetta San Gaetano not far from Basilica di San Paolo Maggiore, I like to linger with Signora Pina, peacefully putting away the shop's fine selection of traditional pastries like parigine, zeppole and ventagli. Capparelli's best insight into the true taste of Naples is however their babà. The pillowy mushroom-shaped levened pastry is baked and then soaked in a simple syrup and rum blend, and is one of the city's symbolic desserts. Babà can be plain, or filled with sweetened whipped cream, pastry cream, and even ricotta cream, topped with macerated cherries or fresh berries. 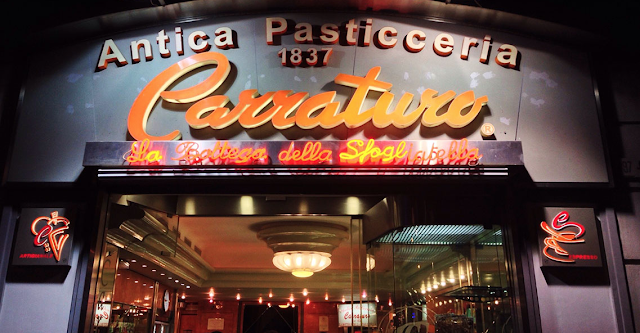 Founded in 1837, this is one of my favorite and less glitzy bakeries in Naples. Usually after a slow passeggiata from the Archeological Museum, passing by the Contemporary Madre Museum, I head east to busy Piazza di Porta Capuana (old city stone gate with triumphal carvings) just to stop at Carraturo, and then virtually feel my blood sugar spike. Round occhio di bue shortbread biscuits, babà, pastiera and other classic Neapolitan specialties are always served with a smile. A fine cup of espresso coffee completes the offer. 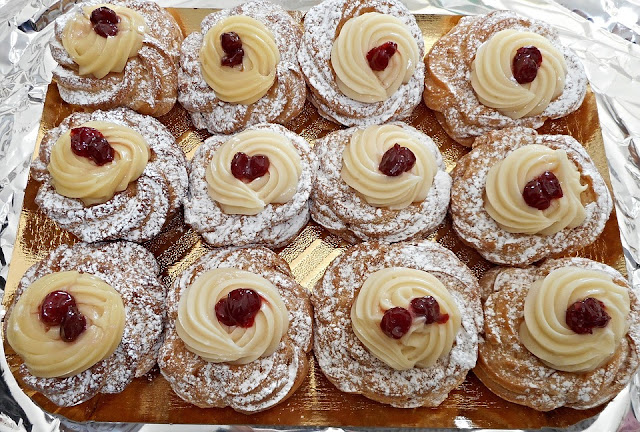 Well known for its aromatic espresso, this is where locals can rely on for their zeppole. A word about these delightful pastries: Zeppole di San Giuseppe are baked (or fried) in the days leading up to San Giuseppe (the feast of St. Joseph, on March 19th, Italian Father's Day). These are ring-shaped choux pastry that once baked/fried are sliced open and filled with lemon-scented pastry cream and topped with syrupy amarena cherries. Obviously the fried zeppole are better. Cimmino has two branches, one on Via Filangieri and the other, with gulf and Mt Vesuvius views, on posh Via Petrarca. Both shops have issued a court order against me for excessive patronage. 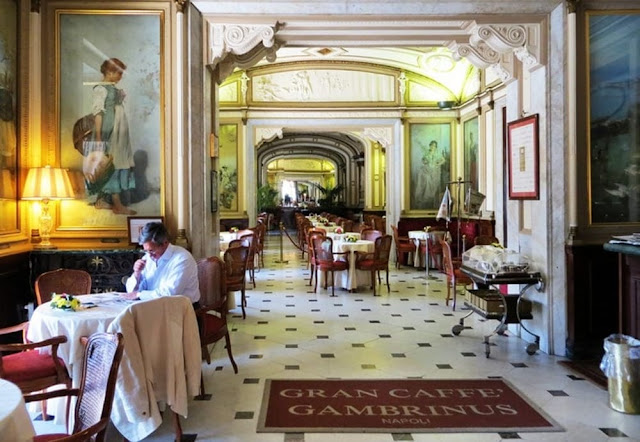 Located at the intersection of Piazza Plebiscito, classy via Chiaia and the royal palace of Naples, with its own Teatro San Carlo opera house, the historic cafè has been a haunt for intellectuals, politicians, and bon vivants since 1860. Reminiscent of the elegant Belle Epoque coffee houses of Vienna or Paris, illustrious Italian celebrities––like poet Gabriele D'Annunzio and philosopher Benedetto Croce, as well as international personalities such as Oscar Wilde and Ernest Hemingway––shaped the country's culture while munching on buttery tea-time biscotti. 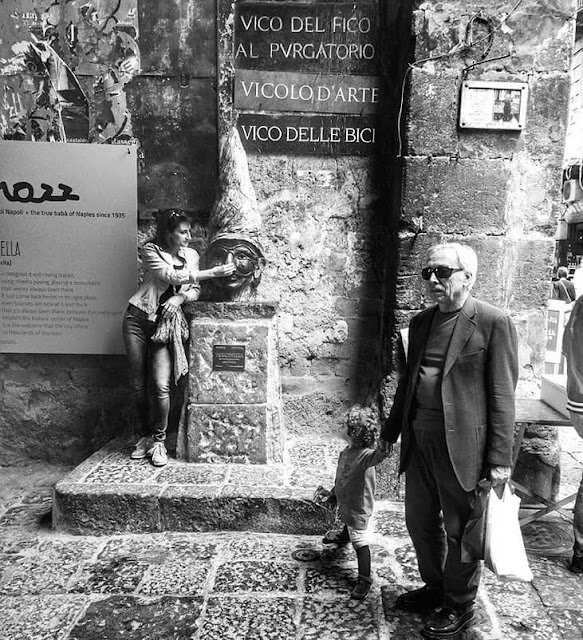 When ricotta and cream are whipped together with poached pears and then sandwiched between speculoos-type hazelnut biscotti, you get a delicious local cake called ricotta e pera. While the crunchy crust pushes out the soft center when bitten into it, the contrast in textures and delightful taste make this one of my favorite Napolitan cakes. I have found the best ricotta e pera to be served at Mazzaro, which recently changed its name to Mazz. Located on Via dei Tribunali, the bakery sits under the archway with the bronze Pulcinella head. Their zuppa inglese (a sort of trifle) isn't bad either! 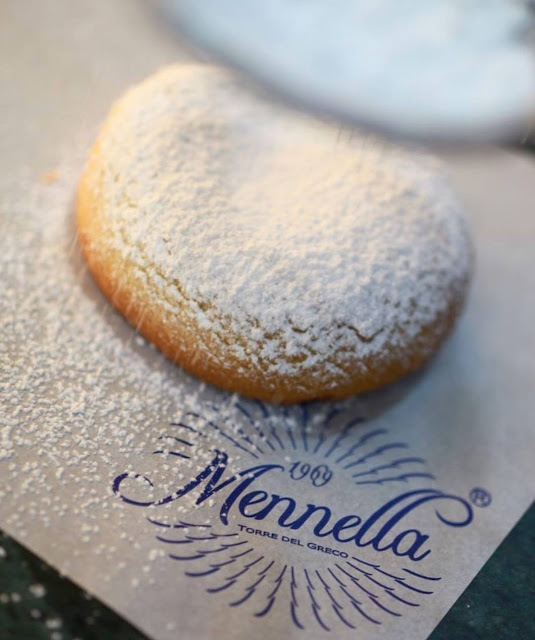 Way back in 1969, Antonio Mennella set up his pastry shop in Torre del Greco. Fast forward 40+ years later when the founder's sons Vincenzo, Giuseppe and Roberto's passion turned those humble beginnings into a booming pastry and gelato business, opening 5 city-wide shops and a modern centralized bakery lab where their traditional and modern creations come to life. 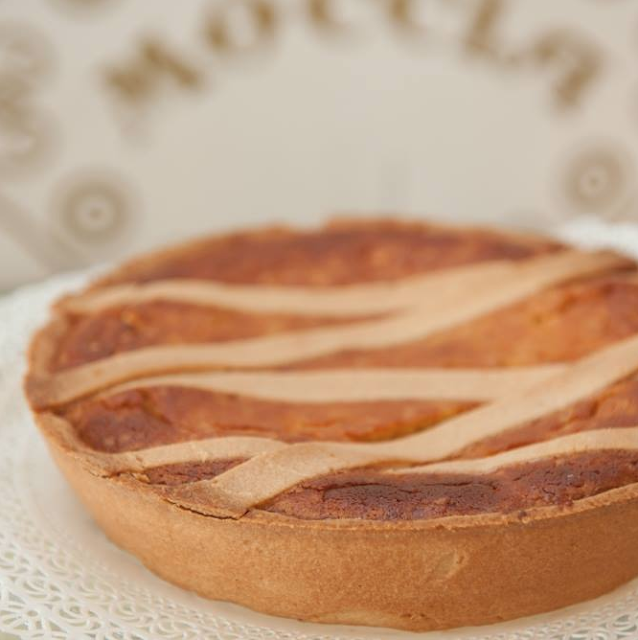 In the spring of 1936, inheriting her parents' passion for bread baking, Signora Giuseppina Moccia opened a panificio on Via Roccella, now called Via Carducci. When in 2014 the San Pasquale branch of the family franchise closed, we worshippers of their signature pizzette and sweets were in shock for months. The Posillipo store still bakes amazing Caprese, Pastiera, Delizia al Limone and other classic cakes, including a ring shaped babà cake that's not to be believed. A satellite business called Moccia 1936 recently opened by ex-Moccia employees on Via Benedetto Croce, that focuses on the savory signature pizzetta di Moccia. 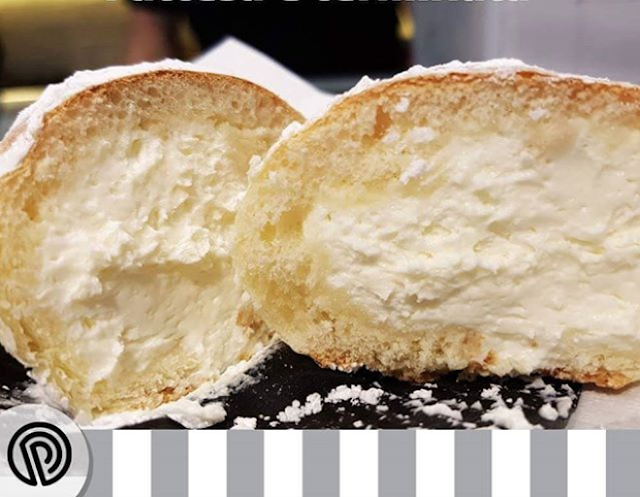 In the heart of the Rione Sanità, in business since 1920, family-run Pasticceria Poppella is where university students and musicians on a break between solfeggios at the conservatory come for Fiocco di Neve (a brioche bun filled with a cream whose recipe is kept secret), Calice di San Gennaro and Bombetta di Totò (white and dark chocolate dipped babà filled with cream), torta Napulè and more. With the third generation now at the helm, in 2016 Poppella opened a second branch on via Santa Brigida, at a stone's throw from the Maschio Angioino castle, Galleria Umberto I and Teatro San Carlo. 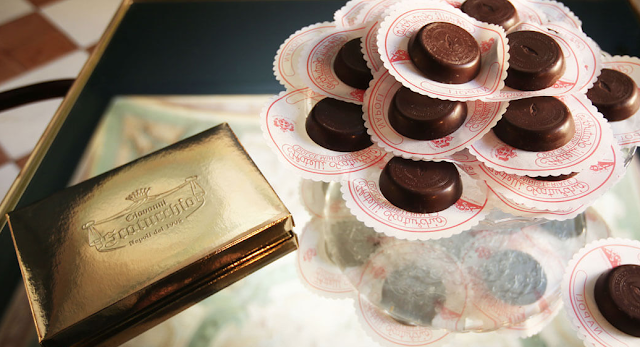 Locals and dessert lovers in Naples flock to the city's oldest pasticceria for cakes like pastiera––a sweet semolina tart filled with orange blossom flavored-ricotta––that's still made according to the century-old original recipe. It's the Ministeriale however that fully represents the 1905 brand. This dark chocolate disk with creamy liqueur, ricotta and hazelnut filling was invented in 1919 by Francesco Scaturchio for the singer diva who went by the name of Anna Fougez (her real name was Maria Annina Laganà Pappacena). The success of the praline urged its creator to request the title of supplier for the royal house of Savoy, for which he underwent a grueling bureaucratic procedure at various ministries; which gave the chocolate the name "Ministeriale." 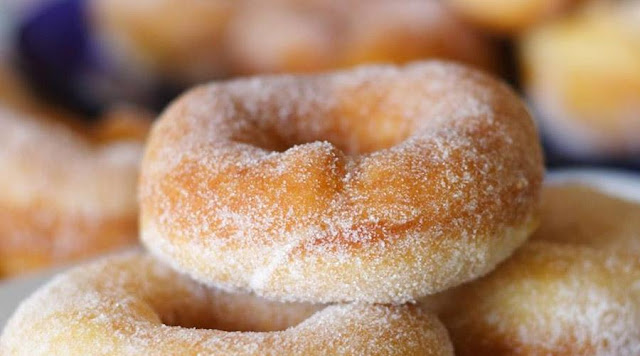 Under the city of Naples is another polis. Going under street level allows to visit areas of urban development from the city's early beginnings to the present day. See the remains of the Greco-Roman aqueduct and the Roman theater in an underground journey spanning 2,400 years of history, from the ancient Greeks to the present day, revealing the "belly" of Naples from an archaeological, historical, anthropological and geological point of view. When you emerge back in Via dei Tribunali, reward yourself with a graffa, a typical Italian fried donut, made with potato in the dough. Voglia di Graffa is a teeny take-out place that offers made-to-order donuts: warm, delicious and tremendously caloric. 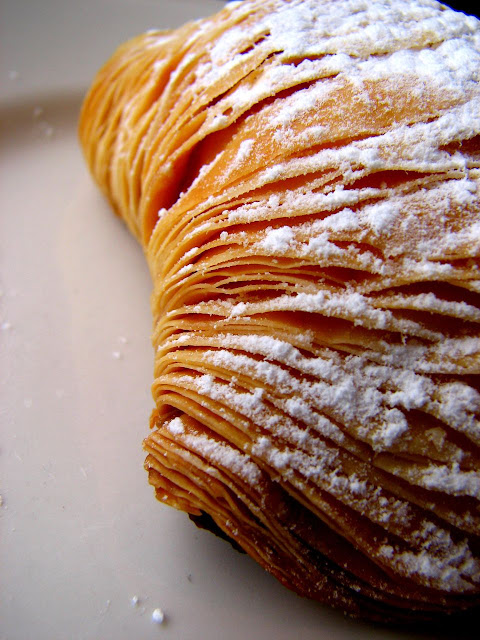 I feel sfogliatella deserves its own story.

If the rum-soaked babà is king, sfogliatella is the queen of Napoli's traditional pastries. There are three versions of sfogliatella: riccia, frolla and Santa Rosa. 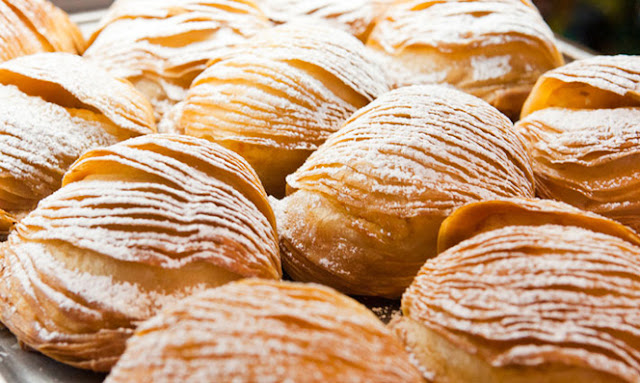 The crust of the riccia ("ruffled") is unique: layers of phyllo-style pastry are each slathered with a thin veil of rendered lard and rolled very thin. The obtained pastry dough is then shaped into a clam-like shell and filled with a custardy mixture of semolina, sweetened ricotta, eggs, sugar, candied citrus and a hint of cinnamon. When baked, the layers separate and become crisp, giving the sfogliatella its characteristic ridged look. Icing sugar sprinkled on top completes these messy bites. 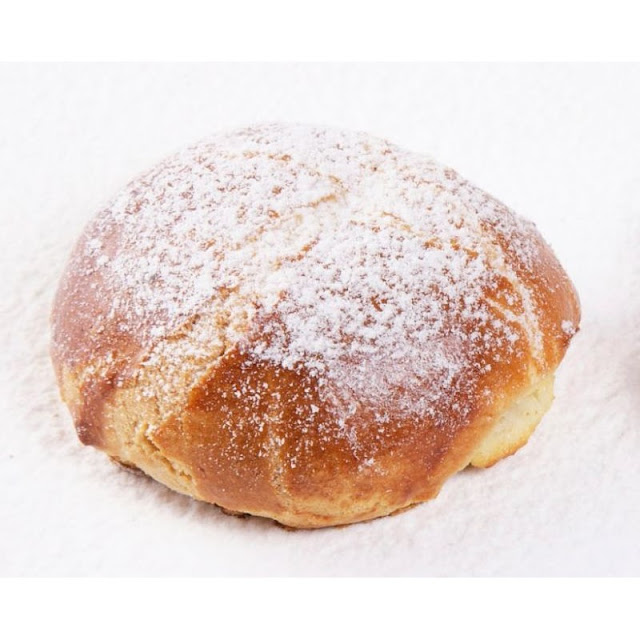 Sfogliatella frolla, on the other hand, pasta frolla (shortbread crust) instead of the flaky layered one of the riccia. The filling remains the same, while the smooth buttery crust is round and dome-shaped. 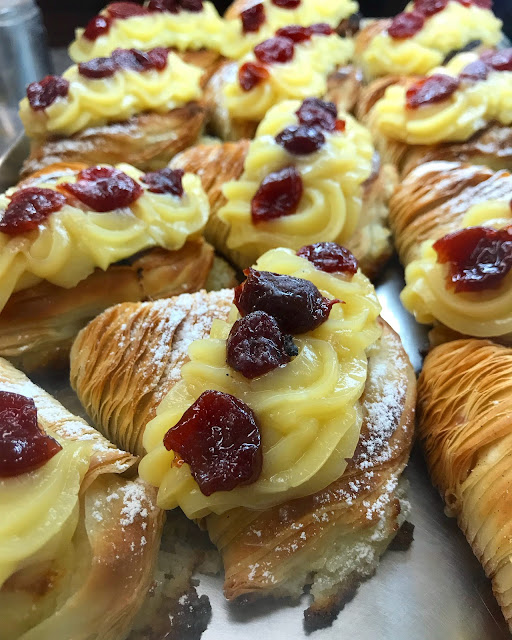 I eat sfogliatella any time I can, and in Naples any self-respecting bakery will have their own version. After extensive research, I have pared down my favorite sfogliatelle to the following bakeries:

At a stone's throw from the Napoli Centrale train station, wedged in a tiny alley, is a pastry shop that focuses its production on sfogliatelle of all kinds. In business since 1930, Attanasio’s particularity is the always hot "parking" oven where sfogliatelle are kept warm and dusted with icing sugar at the very last moment.

This place has been serving sfogliatelle since 1785. Pasquale Pintauro is the name of the pastry chef that started selling them after acquiring the original ancient recipe devised by the nuns of the cloistered convent of Santa Rosa in Conca dei Marini, on the Amalfi Coast, dating back to the 1600s.

This is a tiny bakery located at the western (via Toledo) entrance to Naples' oldest shopping mall, the Galleria Umberto, which sits opposite Teatro San Carlo. The queue outside this hole in the wall betrays the quality of the sfogliatelle. Their frolle are without a doubt the best in town.

To thoroughly appreciate sfogliatelle, it's of paramount importance to eat them straight out of the oven while still warm. A warning, though: in the rapture of the scent of sugar and cinnamon, please avoid voraciously biting into them carelessly like I usually do: the pastry shell is warm, but the ricotta filling is volcanic.

If writing about Naples and my pastry addiction, I wouldn't be doing justice to either if I concluded without mentioning chocolate.

My favorite temples of cioccolato in Naples are:

The historical chocolatier founded in 1894 is the dream come true of Isidoro Odin, a masterful confectioner who moved to the city from the north of Italy, and his wife Onorina Gay, both attracted by the vibrant cultural animation that Naples offered in that period. Gay-Odin has grown and now has nine shops across the city, and one in Milan and another dangerously located 2 block from my house in Rome. The various chocolate pralines, chocolate bars and signature sweets are still produced with the same artisanal expertise. Favorite creations include Foresta, chocolate bark made of milk chocolate, and the Vesuvio, shaped and named after the nearby dormant volcano. 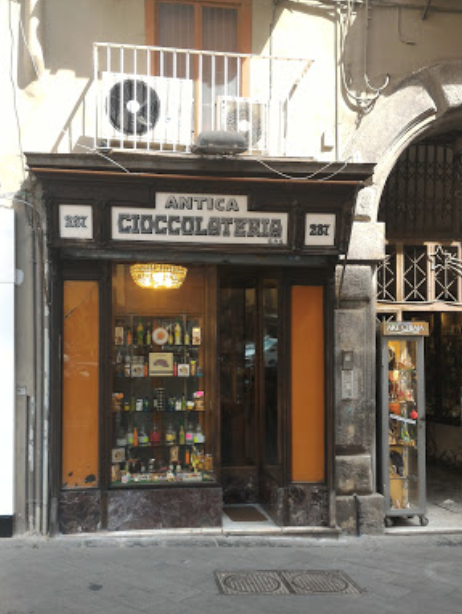 The small shop at Via Chiaia 237 is a bit dark and cramped, but the cozy environment is saturated with the sweet smell of cocoa filling the room. A place that truly maintains faith to its name. In fact, Antica Cioccolateria Parlato is not only in its original location, but also keeps the same artisan vocation, including in the small streetside display window, the signage, the counter, wooden shelves, and glass bowls filled with chocolate pralines, liqueur chocolates, bars and delicious "confetti" sugared almonds that beg to be perused. 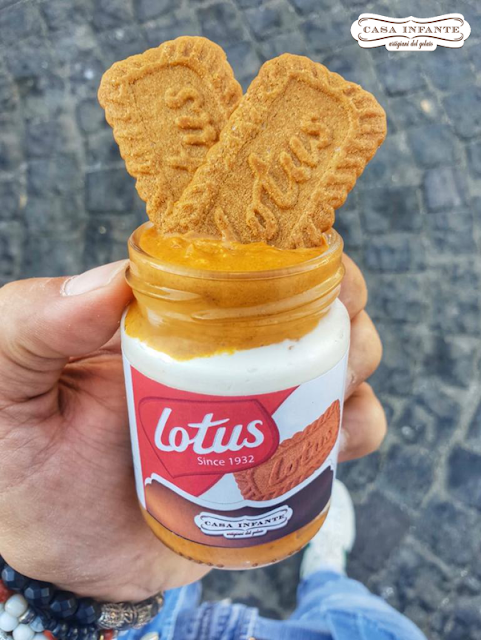 True, this place falls in the gelateria category, but it cannot go unmentioned. Originating in the 1940s, the family-run gelateria boasts fine homemade flavors such as chocolate, caramel, and creamy white chocolate, and seasonal delights like walnuts from Sorrento, cantaloupe melon and Amalfi lemon. I have been banned from the Piazza Vanvitelli store for having abused of thier cheesecake flavor that came served with cascading blackberries, blueberries, redcurrants, cookies and strawberries, and from the Via Chiaia branch for ordering too many jars of layered caramel speculoos cookie flavor topped with Lotus cream... 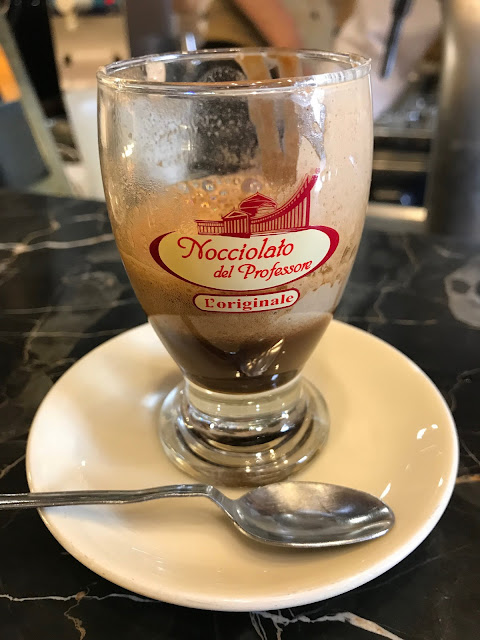