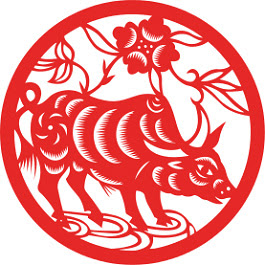 My son's birthday falls on Chinese New Year's Day this year. Yesterday, January 26th, we celebrated with early morning cuddles, clinking cappuccino and milk mugs in the kitchen, and drove to school where his teachers crafted a special birthday crown and served my lemon cake for dessert. I baked it during yet another insomnia spell the night before. My gorgeous enamelled vintage Gasfire cooker is a historic fixture of my little home, and so much a part of me, that I could never part with it.

But while the stove is overly powerful – its 5 burners charred and intimidated by the force of the flames within – the oven can only be described as loffio, a great Italian word that combines the terms listless-weak-limp-dull-lame in one perfect onomatopoeic expression. So between the dinner wine, the wee hours and the loffio oven, my son’s birthday cake turned out a disaster. Ugly, uneven and (I fear) dry. Kids apparently are not judgemental palates – as long as sweet and celebratory, they'll gobble anyhting – because none of it was left when I went to pick up my little boy.

Despite the foul weather and a hissing cold wind, I decided to go check out the Roman Chinatown for some New Year's celebrations. E agreed to dancing dragons and fireworks, I reveled in the anticipation of the free food samples.
Piazza Vittorio and its vicinities is Rome's declared Chinese quarter, today's party was in and around Via Principe Amedeo, where two large orange and red dragons with green eyes, mile-long tails and an amazing set of dentures bopped in the rainy street before us. When the rain got too out of hand, the parade moved inside the marketplace. The Mercato di Piazza Vittorio, now called Mercato dell'Esquilino, one of Rome’s most important and traditional markets. It was originally located outdoors at the center of Piazza Vittorio and used to be run mostly by Roman vendors. In recent years, as the Esquilino district evolved into a largely multicultural neighborhood, the market was moved indoors in a former milk plant just east of the piazza, and its vendors as well as its shoppers, are now represented by a wide variety of ethnic groups. The Esquilino market is an interesting place to visit to immerse yourself in an exotic atmosphere. Here you will be able to puzzle at the odd shapes of unknown fruits and vegetables; be overpowered by the bright colors and intense smells of spices; you will be discombobulated by the din of a multitude of different languages. Mostly, after having purchased 26 different types of rice and an equally high number of spices, you will have had a different experience of the ever-evolving Eternal City.

Yesterday we learned one significant trait that closely associates the Chinese New Year to the Italian one, and that's Luck. In Italy on December 31st, we Italians wear red underwear, eat propitious foods like lentils that symbolize money, gamble, light firecrackers at midnight, and discard old stuff welcoming the new year in.
It so happens that the Chinese too are very superstitious, and the epitome of their prosperity-summoning rituals, favoring fluke and all possible ways of evading misfortune, pinnacle on their own Lunar calendar New Year's eve, just like us. Chinese people too wear lucky red which symbolizes fire, that according to legend can drive away bad luck; they will often gamble at the beginning of the year, hoping to get luck and prosperity; eating fish and chicken is customary because the names of these foods sound like the words surplus and success; just like in Italy, the Chinese clear out clutter from the house to let new Chì energy in, and explode huge quantities of auspicious fireworks. The only difference is that in Italy we don't parade 30 ft long feathered dragons or play huge drums. It is believed infact that the loud beats of the drum and the deafening clang of the cymbals together with the fierce face of the dragon dancing aggressively can evict bad or evil spirits. 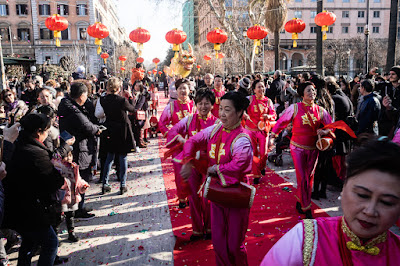 The following is a list of beliefs I picked up as I chatted up the Esquilino Chinese residents yesterday, mindless of the cold rain:
1. Opening windows and/or doors is considered to usher in the good luck of the new year.
2. Switching on the lights for the night is considered good luck, and also scares off ghosts and spirits of misfortune that may compromise the luck and fortune of the new year. E particularly liked this custom and suggested we adopt the habit year round (he hates the dark).
3. Sweets, dried fruits and nuts are eaten to ensure the glutton a "sweet" year.
4. It is important to have the house completely clean from top to bottom before New Year's Day for good luck in the coming year (however, cleaning the house on or after New Year's Day is somewhat of a fortune no-no).
5. Some believe that what happens on the first day of the new year reflects the rest of the year to come, setting a precedent.
6. Wearing a new pair of slippers bought before the new year, is considered good luck because it signifies trampling on the people who gossip about you.
7. Changing different things in the house such as bedding, clothes, sofa covers etc. is also a well respected tradition in terms of cleansing the house in preparation for the new year.
8. The number eight is very, very lucky!

Legend has it that in ancient times, Buddha asked all the animals to meet him on Chinese New Year to party. Twelve showed up, and Buddha named a year after each one. He announced that the people born in each animal's year would have some of that animal's personality. Those born in Ox years tend to be stable, fearless, obstinate, hard-working and friendly. Famous people born in the Year of the Ox include: Johann Sebastian Bach, Anton Dvorak, George Frideric Handel, Napoleon Bonaparte, Charlie Chaplin, Anthony Hopkins, George Clooney, Walt Disney, Jack Nicholson, Meryl Streep, Jane Fonda, Clark Gable, Jim Carrey, Oscar Peterson, Vincent Van Gogh and Barack Obama! The Chinese horoscope says the powerful Ox sign is a born leader, being quite dependable and possessing an innate ability to achieve great things. Hooray for the 44th President!

This is typical Chinese New Year’s food:
Buddha's Delight: An elaborate vegetarian dish tipically served by Chinese families on the eve and the first day of the New Year. A type of black hair-like algae (pronounced "fat choy" in Cantonese) is also featured in the dish for its name, which sounds exactly like the word for "prosperity".
Fish of every sort is a must. The pronunciation of fish makes it a homophone for "surplus." A whole fish represents togetherness and abundance. Also a whole chicken for prosperity, which must be presented with a head, tail and feet to symbolize completeness. Noodles should be uncut, as they represent long life. Duck symbolizes loyalty, while eggs signify fertility.
Jau gok: The elemental Chinese new year dumpling. It is believed to resemble ancient Chinese gold ingots, therefore wolfed down in huge amounts.
Mandarin oranges: The most popular and most abundant fruit during Chinese New Year – jin ju – another fortuitous sounding word.
Bakkwa: Chinese salty-sweet dried meat, akin to jerky, which is trimmed of fat, sliced, marinated and then smoked for later consumption or packed in red boxes as a gift.
Yusang: Raw fish salad. Eating this salad is said to bring good luck. Usually eaten on the seventh day of the New Year.
Taro cake (aka dim sum): The pan fried square cakes are semi-crunchy rice flour pockets filled with pork and Chinese black mushrooms, or sometimes Chinese sausages. I sampled mine topped with chopped scallions.

Chilled and wet, we bounced back home still intoxicated by the vibrant red festivity, exotic perfumes and serendipity oblivious of the incessant rain. We brought home a noisy little drum, a carved turnip in the shape of a fortunate carp, some paper lanterns, a calligraphy poster, two Chinese knots, papercuttings, couplets and 700 types of Oolong tea. 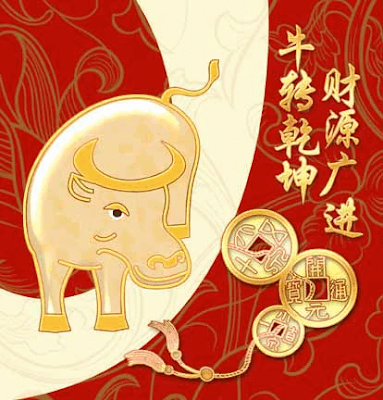