The keyhole at Knights of Malta

White and green. The two predominant colors in the Piazza dei Cavalieri di Malta. They are the hues of the carved marble and the feathery foliage of cypress, ivy and palm trees.

The walk uphill Via Porta Lavernale, leaving Testaccio's busy Via Marmorata behind, is quite a work-out. The incline is steep, but the surroundings pretty, so flexed calves and burning buttocks almost become a pleasant feeling. You'll find that the Piazza at the end of the passeggiata is empty: a Carabinieri patrol car, engine idling, perhaps a street vendor selling chilled water bottles, candy and microwaved Jurassic pizzas, and that's it. The place is deserted and peaceful.

At the far end of the square, set like a black diamond in the white facade, the huge doorway (always shut) is the mighty entrance to the headquarters of the Sovereign Order of the Knights of Malta. The one dark spot in the otherwise blinding glare of marble in the sun.

If you stop a while here, you'll see the occasional group of tourists approaching the closed doorway and taking a peek. And then they leave. Ten minutes later, a car may drive up–oftentimes a rented limo with driver–an Asian couple alights. They take a peek. And then they leave. No big deal. The Carabinieri sit motionless in their purring vehicle. Nothing strange is going on.

What everyone is peeking at is the 'Hole of Rome,' the famous keyhole through which the dome of Saint Peter can be clearly seen at the other end of a secret courtyard. The trees in the Order's garden romantically frame the perfect image. 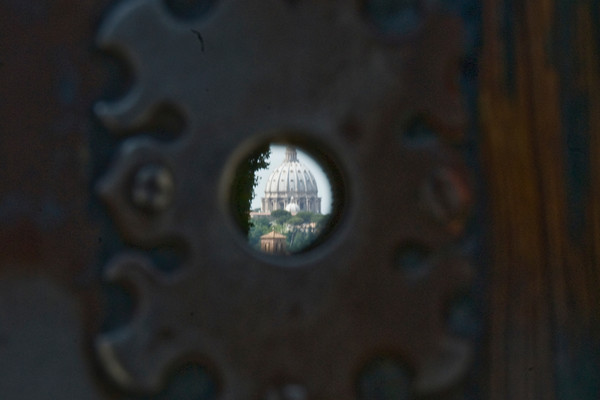 It may be a cliché, but the ritual of the "peek" is always a touching moment, like a sudden row of multiple stone arches, or harp music in a classical composition. There's something oddly sentimental in leaning forward, closing one eye and looking at il Cupolone, the dome–as we call it here–through one of Rome's most prohibited locations, mainly because the show through the keyhole is one hardly forgettable. This is in fact the only possible contact with what resides beyond the heavy closed doorway. The only exception is possessing an uber-authoritative decree signed by the Knights themselves, allowing the fortunate pilgrim through.

Neither the church of Santa Maria del Priorato, Giovanni Battista Piranesi's XVIII century remodeling work of art commissioned by Cardinal Rezzonico, the courtyard, nor the Order's convent are accessible to the public. What Piranesi's genius was able to rebuild, landscape and decorate cannot be seen in person. Only the Piazza and the famous doorway is for everyone to have. A consolation prize.

Sure, it would be great to continue the visit and see the church. But you can't.

One must be content with the emptiness of the ivory Piazza. Appreciating subtraction and absence; and basking in its silence. I like to come up here to peek through a keyhole, squint at the white of a marble facade, and drink up the deep greens of the cascading ivy, the cypress and the palms caressed by the sun. 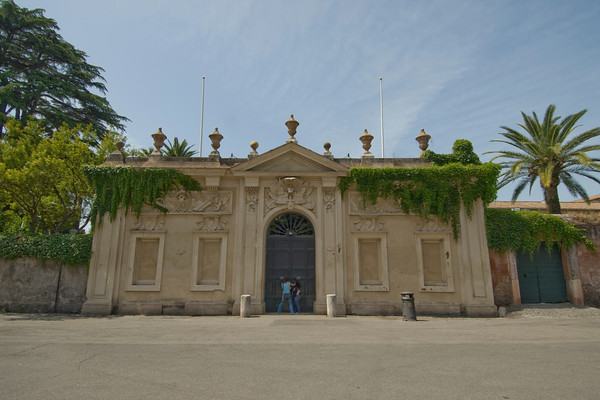