100 Places in Italy Every Woman Should Go book review

There's a new book every woman should read. Wandelust writer and Italy-expert Susan Van Allen has put together a love letter to Italy. I am honored she picked me to tell you about it here.

100 Places in Italy Every Woman Should Go is a compendium of captivating stories, useful pointers and magical places seen from a feminine point of view. Susan's itineraries add depth and novelty to the Italian dream vacation. Her empirical tips, interlaced with fascinating insider knowledge, make this book a must read for independent women travelers seeking to discover the Bel Paese's hidden treasures.

The following is an extract from her book that Susan has decided to offer my epicurean readers.

So make yourself comfortable, pour yourself a glass of vino, and enjoy with me Susan's account of Italy's Women Owned Wineries:

"Lucille Ball lifting up her skirt, jumping into a barrel, and stomping grapes with the peasants might be the first image that comes to mind when you think of Italian women and winemaking. As entertaining as that is, cut to the twenty-first century’s more sophisticated and inspiring phenomenon: Italian women have jumped into the art of winemaking and joined the ranks of the country’s top producers, winning awards and high scores in wine journals.

It all started in the 1980s, when gutsy Italian women began to move away from their traditional roles. Instead of simply helping out on their family’s farms and with marketing, they enrolled in winemaking schools, often where they’d be the lone female in their classroom. In 1988, an organization called Le Donne del Vino (Women of Wine) was formed, and now it has over two hundred members from all over Italy.

Che coincidenza that ever since that time Italian wines have become some of the most beloved in the world. Not only have women brought fresh insights into production, they’ve also pumped up the marketing, traveling internationally as multilingual ambassadors for Italy’s major export. Big wineries like Antinori, Lungarotti, Planeta, Argiolas, and Zenato all have women running them or in top-level positions.

If you're planning on visiting wineries, keep in mind that most aren't set up Napa Valley-style with elaborate tasting rooms and souvenir shops. Once again, a woman, Donatella Cinelli Colombini (profiled below), was on the forefront of Italian wine tourism, founding an organization in 1993, called Movimento Turismo del Vino. It now includes over eight hundred wineries which host events throughout the year. The most famous is Cantine Aperte on the last Sunday in May, when these wineries open their doors to the public. For now, even if a winery’s tasting hours are posted, it’s best to call ahead to confirm or make an appointment.


Here are a few of the many places where women reign:

This place is exceptional for two reasons: It’s the only winery in Italy (maybe anywhere) that has an all-female staff, and it produces award-winning Brunello that made history as the first to be designed by an all-female panel of experts. Trailblazer Donatella moved on from her family’s renowned wine business in 1998 to create two Tuscan wineries. Both have brought her great success, including the Best Wine Producer in Italy award from the Italian Sommeliers Association.

A visit to her Casato Prime Donne, a converted sixteenth-century hunting lodge, is not only a wonderful tasting experience. The grounds have been transformed into an open-air museum, inspiring peaceful wandering. Paths amidst the hilly vineyards have rest spots with contemporary artwork or engraved quotations from winners of the Casato Prime Donne award, given annually to a female who has promoted women’s roles in society. Among previous awardees are the Cabrinian nuns and the ballerina Carla Fracci. The engraved quotation on Fracci’s signpost says: "Look around, you are in the moral center of the world."

Guided tours in English are available Monday-Friday, and by appointment on Saturday and Sunday.

"Earthy and soulful," is what I’d call Anna Lisa’s Martin del Nero Rosso Orcia wine. I would describe her the same way. Her passion for sharing her passion of the Val d’Orcia, a place she’s called home for twenty years, is deep. In only half a day with her, I felt plugged into the spirit, and flavors of this place.

Though she grew up in cities, Anna Lisa is a country girl at heart. She was born in Chicago and moved to Florence with her family when she was four. Her love for wine began when she was nineteen, working in the PR department of Florence’s Chianti Consortium and slipping next door to taste top DOCG wines. Yearning to work in the vineyards, she quit her job and headed to the Val d’Orcia.

I meet her twenty years later, with a husband and three kids, living in a converted monastery that overlooks her very own vineyard. We taste her wonderful wine, her olive oil, there’s even some balsamic vinegar she’s working on. As Anna Lisa is part American, she especially enjoys visitors from the States, and she’s sought after for her custom-designed winery tours and cooking classes. “Each tour is an adventure for me, as well as my guests,” she said.

My tour included lunch at the Vineria Le Potazzine, in the heart of the nearby medieval hilltop town of Montalcino. Wine bottles surround us as we dig into homemade pici with sugo di cinghiale (thick spaghetti pasta with a sauce of tomato and wild boar). We taste a rich, delicate Le Potazzine Brunello, made by Anna Lisa’s girlfriend Gigliola and her husband. Potazzine are the little, colorful birds that flit about these parts, and also a word used as a term of endearment for children.

As we’re sitting there, Gigliola’s two young potazzine burst in from the school bus. They’re wearing matching grape-colored turtlenecks. Full of energy, the girls spin around, kiss their parents, then settle down for lunch. That’s just how idyllic life can be around here. 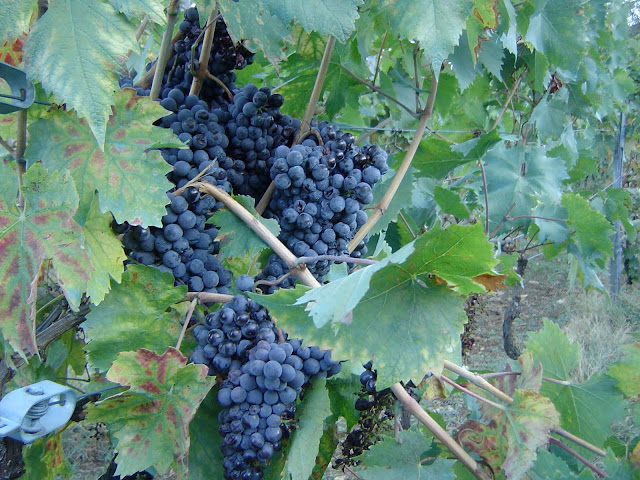 Piedmont: Le Langhe–Barolo
West of Alba, the northern Italian town that’s famous for its white truffles, is a graceful wide valley of lush vineyards—Le Langhe—where Barolo, the “King of Wines” is produced. It was a woman, Marchesa Giulia Colbert, who made Barolo famous in the nineteenth century. She wanted somethiing better than the wine that was being produced from the grapes growing around her Piedmont castle. So she called in a French wine expert to make wine similar to a Bordeaux. She was so happy with the result, she sent cartloads of it to the King of Savoy in Turin. It became a hit there and all over the courts of Europe.

Anna has been married for twenty-eight years to Ernesto Abbona, whose family has owned this prestigious winery since the early twentieth century. She’s a glamorous VIP of the wine world and when I met her she graciously took a break from a meeting with producers to sit with me in the dining room, which she also oversees. By the way, you must make a reservation to have lunch here to enjoy Piemontese specialties such as brasato—veal braised in Barolo. “My husband is home resting from the weekend,” she said. “We women are stronger!”

The winery is a grand butter-yellow complex that sits across from the Barolo castle where Marchesa Giulia Colbert once reigned. It originated as the headquarters for the Opera Pia Barolo, a charitable foundation Giulia created to help the town’s needy, which the Abbona family keeps going. On a tour, you get to see the original barrels used in Giulia’s day, and there’s an incredible wine library, with a bottle of Barolo from 1859 as well as shelves that hold vintages from 1938 on up—totaling 35,000 bottles.

“The Barolo Boys and One Girl” was written on a t-shirt for a promotional tour for Barolo in the 1980s. That one girl was Chiara Boschis, who was put in charge of this place in 1990. Chiara says that since her parents never treated her any differently than her brothers (who taught her winemaking), working in the male Barolo world has never been a problem. Chiara’s an exceptionally attractive woman who makes a silky and refined Barolo. It’s won many awards and turned a spotlight onto this small winery that puts out a limited produc-

tion. The winery offers accommodations in a renovated farmhouse on the outskirts of Barolo—a perfect agriturismo base to explore the abundance of delicious wines in the region. Movimento Turismo del Vino: www.movimentoturismovino.it

About the author
Susan Van Allen's passion for Italy stems from her maternal grandparents, who emigrated from Southern Italy to the US. When she first stepped off the train into Roma Termini in 1976, she was immediately hooked on Italian travel. Since that day she's explored Italy up and down the peninsula–visiting relatives, immersing herself in the country's masterpieces and culture, taking language and cooking classes, and going on boating, biking, and hiking adventures.

Grazie, Susan for sharing your love for Italy here!

The best book of the year for traveling women is available online and in bookstores near you.
I was not paid for this review, I received a free copy of the book.
Pubblicato da Eleonora Baldwin

Email ThisBlogThis!Share to TwitterShare to FacebookShare to Pinterest
category: 100 places in Italy every woman should go, book review