Gelato is among Italy's most loved and consumed foods, but where do its origins reside? And exactly how is it produced? Grab a scoop and discover the evolution and characteristics of Italy's most popular product. 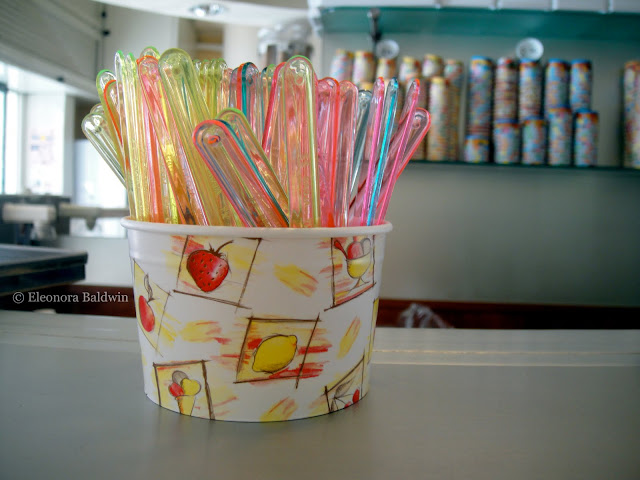 The history behind gelato is uncertain. There are two theories, and the first asserts that the inventor of Italian ice was a Renaissance artist who lived off his sculptures, paintings and set designs for the sumptuous parties Cosimo I de’ Medici would throw at the Florence court. Bernardo Buontalenti was his name, and, according to a legendary tale, his frosty invention happened during the majestic plans for a banquet honoring very important Spanish guests. On the night of the event, he managed to astound his VIP audience with a curiously chilled concoction made with bergamot oranges and lemons, obtained through a clever use of ice and rotating barrels.
Before Bernardo's engineering inventions, the only chilled foods in existence had been "sorbet" hailing from the Middle East, imported to Italy by the Crusaders. Astonishing how a foodstuff made with crushed ice mixed with citrus-based beverages could survive the Arabian Peninsula's climate. Today we call that miracle granita. 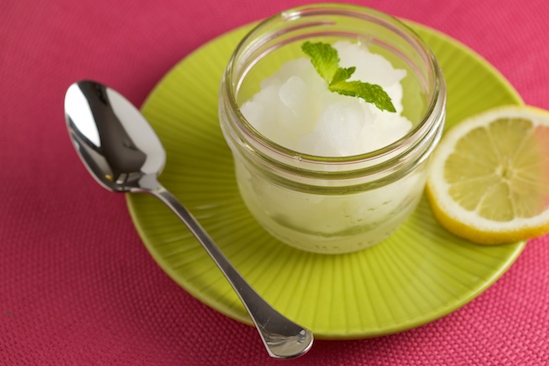 The second theory on the birth of gelato relies on the figure of Francesco Procopio de’ Coltelli, a Sicilian who invented a machine specifically intended to blend cream, fruit and ice into a homogeneous mix.

Francesco knocked at the Versailles doors of the Sun King Louis XIV, bearing tubfuls of the new food which immediately fascinated the monarch, and the royal entourage in his wake.

With the king's endorsement, in 1686 Francesco opened a cafe on Rue de la Comédie Française, in Paris. His creamy chilled specialty became the leading attraction, with Parisians flocking in droves just to taste the Sun King's ice cream.

Whether it was indeed Buontalenti or Procopio who invented gelato is still open to question.

Fortunately, the first true chronicled gelati we know of were those created by Italian immigrants from Veneto and Friuli, who at the turn of the century, established in Austria and Germany–two of Europe's leading industrial ice cream manufacturing countries.

The turning point in the ice cream industry came when, in 1927, a gentleman from Bologna–Otello Cattabriga–invented the first automated gelato machine, thus making the product available to a wider public.

So its precise origin may still be debatable, but one thing is for sure, gelato was invented by Italians. 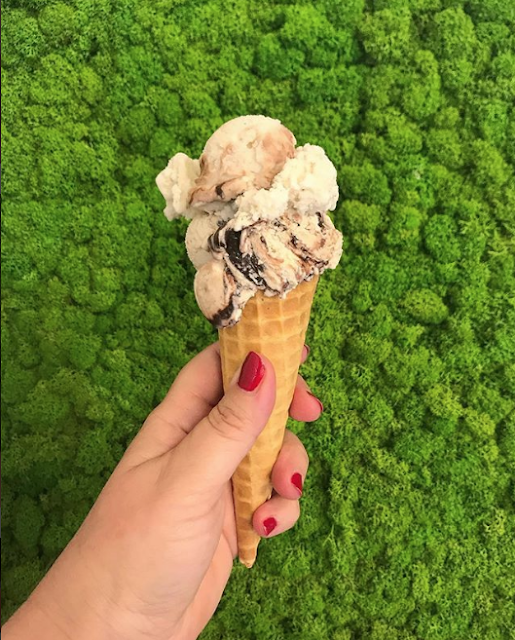 What is the difference between gelato and ice cream?

I get asked this question a lot.

Gelato is not simply an Italian word for ice cream. It is, in fact, an entirely different and unique product, separate and distinct from ice cream. Gelato contains many ingredients as ice cream–water, milk, sugar, flavorings and air–but in uniquely different proportions.

The three most distinctive differences between gelato and ice cream are low butterfat content, low overrun, and extreme freshness.

Butterfat content
In many jurisdictions, a frozen dessert cannot be called "ice cream" if it does not have at least a certain percentage butterfat content. Gelato butterfat content is typically one tenth of regular ice cream. The majority of gelato flavors are made with whole milk instead of cream.

Overrun
Overrun is a measure of air which is injected into the ice cream during production. A high overrun means a lot of air is added to the ice cream during the making, low overrun means there is not much air added. Typical North American-style ice cream can have an overrun of 100% or more. This literally means that half of the ice cream by volume is composed of air. In contrast, artisan gelato has a much smaller overrun, around 30-40%. But some less scrupulous Italian gelato makers have figured out that a higher overrun can cut ingredient and raw material costs. So steer clear of frothy, excessively sculpted and over abundant gelato: it's mostly all air.

Freshness
At an authentic gelateria, the gelato is made from scratch daily. Unlike many overseas ice cream parlors, the gelato here is made on the premises. True Italian gelato is not produced in large quantities and then stored. There are no preservatives added to create an artificially long shelf life, so typically, gelato is made fresh for consumption within a day or two.

The combination of extreme freshness, low butterfat and low overrun results in a product that is denser, creamier and more intense than traditional ice cream. Gelato is served at a warmer temperature than ice cream and has a cleaner, more smooth perception on the palate. 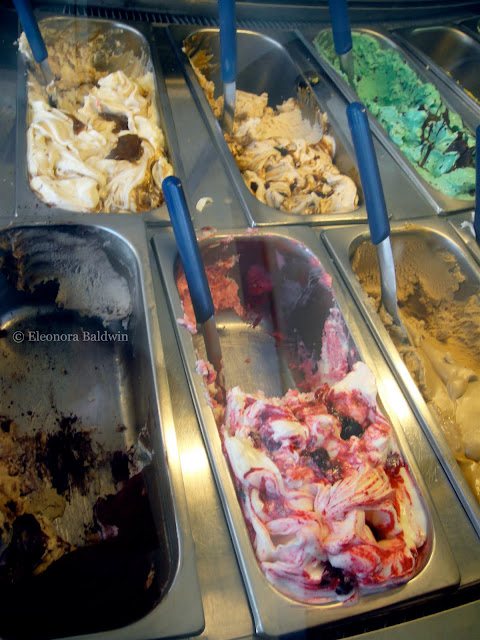 The best artisan gelato can be divided in two greater families: those which are egg/cream-based (chocolate, vanilla, pistachio, hazelnut, zabaglione, etc.) and those that employ fruit as their main component.

The blend that will eventually end up in a generous scoop in your wafer cone, usually starts with the mixture of liquid components, like water and milk. Next are added the slightly thicker components, like evaporated milk, eggs (obviously only in the "creams" category, not in fruit gelato), and glucose.

At this point this blend is heated to maximize homogenization (process in which the fat droplets are emulsified and the cream does not separate). When the heated blend reaches 40° C (104° F), the solid components are added, like sugar, natural thickeners (like agar-agar, or carob flour), ground coffee and cacao powder. This blend is then further pasteurized to guarantee absence of bacteria. 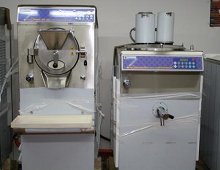 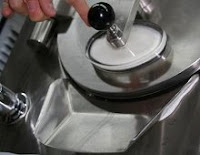 The following stages of production involve vigorous mechanic agitation and brisk stirring; churning in low temperatures, and maturing. These are two very important steps. By resting, the proteins in the milk and eggs absorb the moisture present, which stops the forming of irksome ice crystals, a veritable gelato no-no. Gelato should be velvety, smooth and creamy. If it's sandy and tooth-gritting because of grainy ice in its texture, it definitely is not gelato. This is also the delicate stage at which perfect gelato is whisked just enough and not pumped with too much air to obtain low overrun.

During the churning at low temperatures, gelato finally ices and becomes the creamy frozen delight that we know. At this point the water present in the blend changes from liquid to solid state, and most importantly, this is when artisan gelato makers add the typical ingredients which will define their gelato flavor: freshly squeezed fruit juices, fruit chunks, cacao, gianduja, vanilla, hazelnuts, pistachios, etc.

The final stage of the gelato production is when it is set to harden. The mixture is refrigerated at lower temperatures (-20° C/-4° F), and will be stored like that until beautifully dollopped on a wafer cone or in a coppetta, the typical Italian 3 to 8-oz tub. 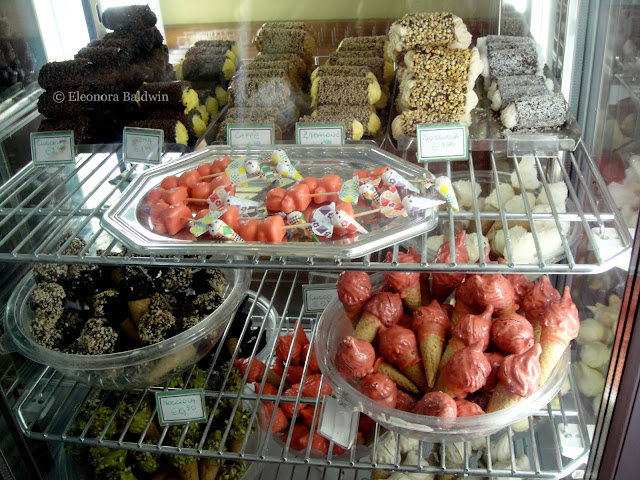 Although gelato can be a year-round treat, strolling the avenues of the Eternal City in summer, we always discover newly elected ice cream shrines, where coppette and cones come filled with unconventional new glacial flavors.


The whim and talent of genuine Italian gelatai are beyond measure. Here are a few personally tried and tested fashionable flavor combinations: 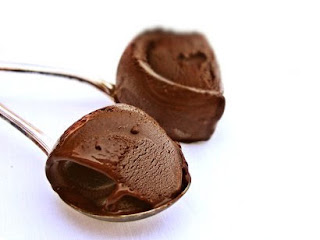