Deciding to move away from the chaos of the city and retiring in one of Alberobello’s trulli cone houses–typical whitewashed dry-stone dwellings of the Valle d’Itria– has always been a dream of mine. This has however recently become a very trendy choice. Tangible proof of this are the price listings of the original edifices: sums well over €250,000 can be payed for the smaller units. 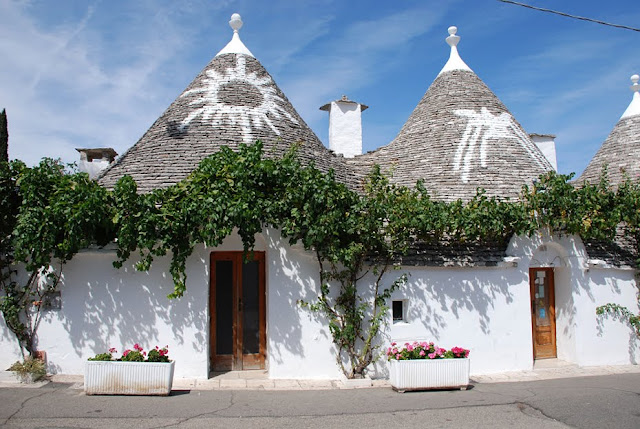 But there's far more to Puglia than lucrative real estate and picturesque olive groves. Puglia is a ridiculously beautiful region. And a very powerful magnet.

The Tremiti Islands, for example. The Adriatic Sea archipelago, north of the Gargano Peninsula (the stirrup of the boot) is divers' and beach lovers' paradise. It forms part of the impressive Gargano national marine park, the Parco Nazionale del Gargano.

The name of the islands is linked to their seismic activity, and their long history of earthquakes–the word tremiti aptly translates to "tremors." 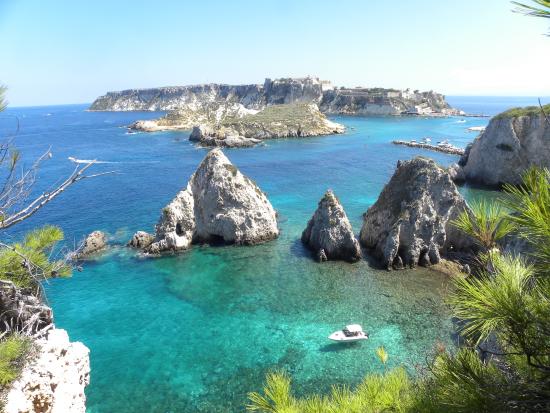 Legend has it that the Tremiti isles were created by Diomede. As mentioned in the Iliad, she was one of Achilles’ mistresses. One of many. Upon her hero's return home back from Troy, Diomede discovered Aphrodite's charm and younger age had replaced her in her lover's bed. In a temper tantrum, she hurled the rocks Achilles had brought back from Thrace as a sheepish gift right into the sea. Those rocks are now the tremor islands.

The best diving spots on the islands' coasts are the Punta del Vuccolo and Cala degli Inglesi, but the Torrione dei Cavalieri di San Nicola, where the remains of a shipwrecked roman vessel with her intact cargo still sitting at the bottom of the sea 30 meters deep, wins first place.

Other things worth doing and that should not be missed when visiting Puglia:

• Visiting the Bari harbor at 10 am, where local fishermen feed early bird clients raw octopus, clams and mussels with warm bread and chilled beer for breakfast; between loud, barking rounds of zumparidde (the vehement version of morra, a numerical grown-up version of "rock, paper, scissors"). 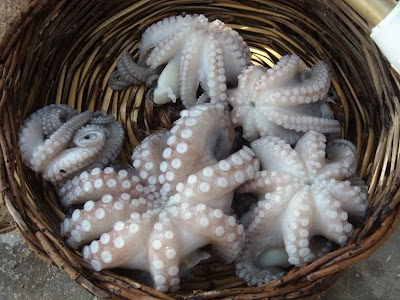 • Spending time in the towns of Vieste and Peschici on the Gargano peninsula to watch the wooden trabucchi fishing implements stretched out at sea from decks perched on steep rocky walls. The complex structured and spider-like "machines" are entirely hand operated–the long, slender pinewood arms couldn't bear the weight of a heavy motorized winch–by 2 to 4 trabuccolanti anglers, who spot the schools of fish, drop the netting and haul up the catch with a series of coordinated agile moves. 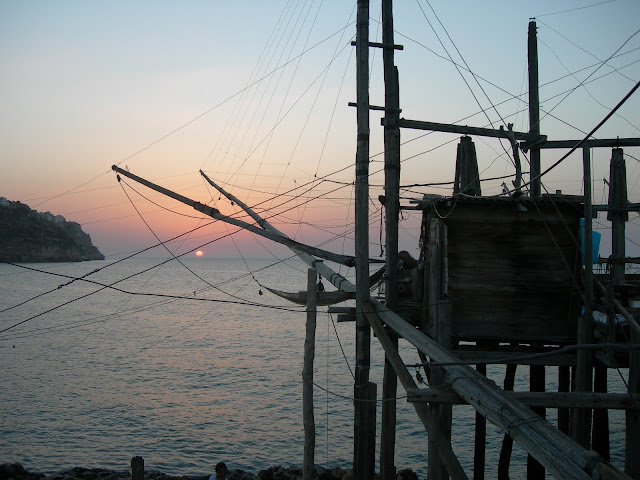 • Staying the night in a masseria, one of the many remodeled rural farms that dot the Canale di Pirro valley, in the municipality of Fasano. A few miles from intact Roman aqueducts, or a prehistoric menhir, 5-star b&bs inhabit the old farm buildings. These facilities usually boast high standards of comfort, spas, wifi, private beaches with dinghies for rent and sometimes 9-hole golf courses. On windy days, paragliding classes are held upon request. 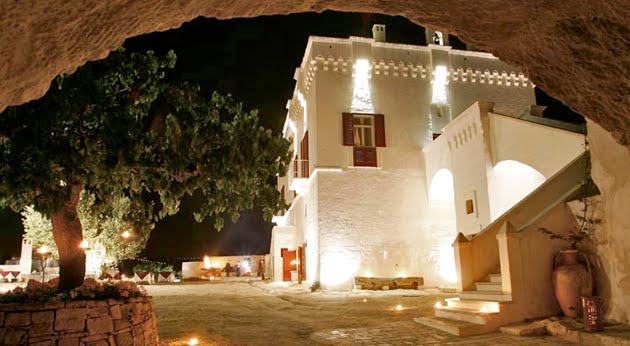 • Shopping for tableware and majolica handicrafts in the small town of Grottaglie, in the province of Taranto, the original home of terracotta. 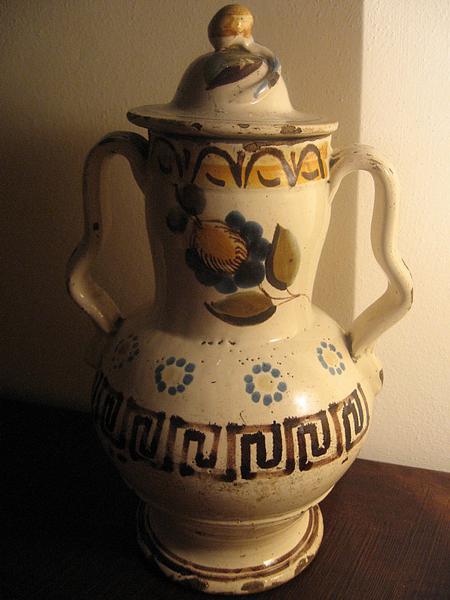 • Visiting Castel del Monte, a spectacular 13th century castle resting on an isolated hilltop, that dominates a vast plateau. Eight sides, eight rooms on each floor, eight eight-sided towers, the impressive stone structure stands inland from Barletta, in the middle of the countryside.
The abundance of red clay in the area promoted the production of pottery––mostly functional vessels, like large jars, pitchers, urn and pots––as early as the 8th century BC. Over time an increasing number of pottery artisans settled in the area, setting up their studios and kilns in natural caves. This "District of Terracotta" is still intact and absolutely worth a visit. 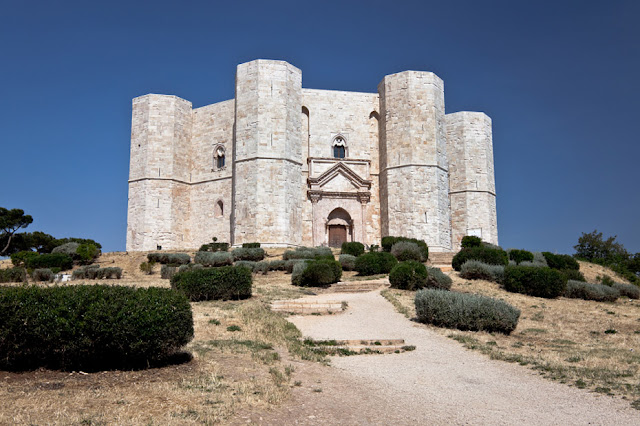 My beloved Emperor Frederick II built Castel del Monte around 1240. It was one of 200 fortresses that the Norman genius erected, but the only one with such an elaborate floor plan. Its shape is compliant to all manner of esoteric, astrological and geometric interpretations. Then again, it could have been just a geometrically pleasing hunting lodge. It doesn’t seem to have had a serious military raison d'être, although its location on top of the only high hill on a vast flat plain certainly gave it a commanding presence. Castel del Monte is listed as a UNESCO World Heritage Site, and you can find it pictured on the obverse face of the Italian Euro cent. 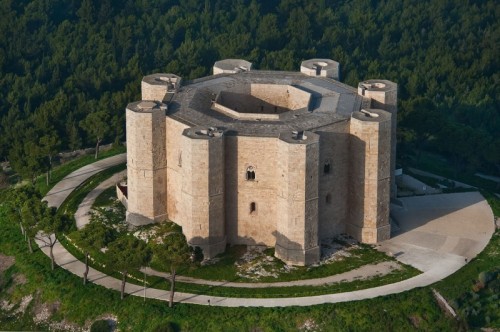 • Dancing pizzica in Salento. The remains of Greek and Roman temples, medieval castles and Arabian-style monuments are scattered all over the dry campagna, popping up amid cacti, olive groves and mill farms. And then there is Salento, a small rural area on the coast, unlike the rest of the region, where you can be liberated of all sorrows by a type of music therapy called pizzica tarantata. 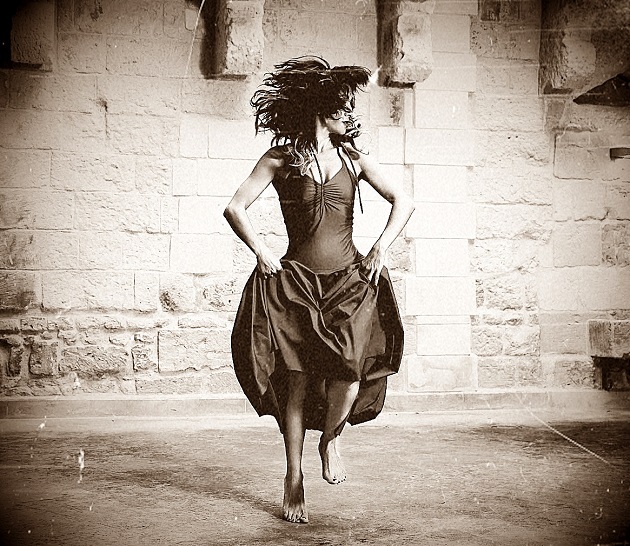 La pizzica is a traditional healing trance dance, originally born in the southernmost part of the Puglian peninsula (Lecce in particular) and later spread throughout the entire Salento area. It is a fast and compelling rhythmic dance done to the accompaniment of a tambourine, or accordion and violin. Pizzica is danced to all summer long, in small beachside village festas or the mega annual Notte della Taranta event held in Melpignano, with guest musicians and massive crowds.

Besides the dishes I have written about, Orecchiette with turnip tops, Altamura bread and fave e cicoria, another Puglia must is at least once making (and then eating) the region's typical taralli. 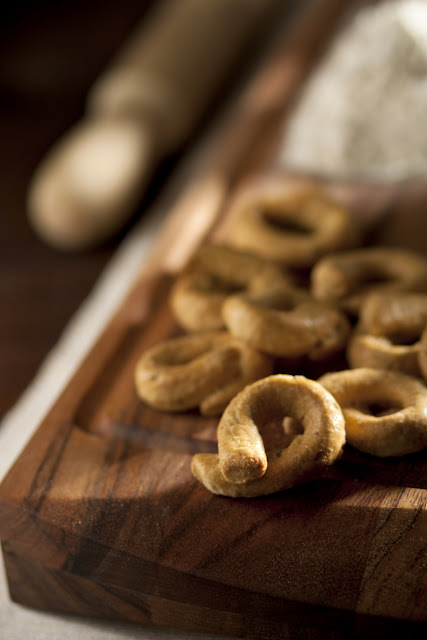 Wheat flour, olive oil, fennel seeds and salt, are baked into small crunchy loop-shaped crackers, which are poached and then baked to a crisp. Traditional taralli Pugliesi are a snack that can easily pair with your antipasto platter, or become your favorite addictive munchies food.

Arrange flour in a volcano mound on your work surface. Pour the oil in the crater, add the wine and a pinch of salt. Knead with your hands until the dough reaches a homogeneous, smooth and elastic texture. Do not over-knead.

Let the obtained ball of dough rest for 20 minutes, covered with a kitchen towel somewhere not too cool and drafty.

Shape the taralli from the dough by forming ropes about 1/2-inch thick and 3 inches long. Bend each rope to form a ring, overlap the ends and press down with a finger to clasp them. Some like their taralli bent in a figure-8 or in a horseshoe shape, that's entirely up to you.

Boil the taralli in batches of ten, fishing them out with a slotted spoon as they surface in the salted boiling water.

Rest the drained taralli on a clean kitchen towel to dry for a few minutes.

Grease a baking sheet with some olive oil and position the taralli so they don't touch one another. Bake for 40 minutes, or until they become light brown. It depends on the oven, it may take less. Don't worry if the taralli feel soggy once baked, they'll become crisp once completely cooled down.

Taralli can be flavored in many ways. During the initial ingredient mixture, you can add 1 or 2 tablespoons of either: fennel seeds, sesame or poppy seeds, dehydrated onion flakes, chopped rosemary, peperoncino, black pepper or a squirt of tomato concentrate, etc.


Note: For 1 kg (2.2 lbs) of flour, your oven's capacity most probably will not contain all the obtained taralli in one single batch. Calculate how many to boil before baking according to sheet size, as the poached dough needs to be toasted right away, within a few minutes.
Pubblicato da Eleonora Baldwin