On March 17th 2011, Italy will celebrate 150 years of its unification, which led to the birth of the country as a nation. It was only after WWII that Italy's borders were re-written on today's maps, but 1861 was the pivotal year in a labored process that unified territories previously ruled by many different (and mostly foreign) sovreignties.

Isn't it staggering to think that a civilization so crucial to the development and shaping on Europe (and the world) is also one of the youngest nations?


All this came with a cost, there were wars, bloodshed, poverty and revolutions. This period of Italian history is known as il Risorgimento, which means "the resurrection," an era of deep awakening for people from all ends of the boot-shaped peninsula who sided together to depose "the invaders" and claim full independence.

Some Italian politicians are not happy with this celebration, insisting on their separatist agenda. But let's not get into that, now. I'm fully embracing this celebration to honor the memory of those who died for Italy's freedom and unification.

There are special events promoted all across the country to celebrate Italy's 150th Unification, myriad exhibits, theater and ballet openings, concerts, sport happenings, street artist performances, book readings, guided visits of major churches and sites, light shows and fireworks. You can find the full calendar of events, both nationwide and for major cities, HERE.

I was invited by Manu to participate in a special 150 Unification Party, a delicious recipe link-up. Please visit her site to see more celebratory posts by participating food bloggers, and join in the fun!

I'm contributing a simple CROSTINI recipe, one that employs typical Italian ingredients and that celebrates the colors of the Italian flag: green, white and red.


Dice the mozzarella, draining away milky whey as you chop.

Dice the tomatoes, discarding seeds and juice. Season them with a little olive oil, a small pinch of salt and a few basil leaves. Leave to marinade for 10 minutes.

Sprinkle each with the seasoned tomatoes and mozzarella, and drizzle with a thread of olive oil.

Place the dressed bread on a cookie sheet and place it the oven for about ten minutes. Here’s why: you want to melt the mozzarella and bake the bread just a bit. If we were to simply stick the pan under the broiler, the cheese would melt and bubble very quickly but the bread might get soggy from the dressing's moistness. After ten minutes, crank on the broiler and finish off the crostini for a few minutes.

Adjust seasoning and serve garnished with more torn basil leaves (cutting them with a metal blade kills the flavor). 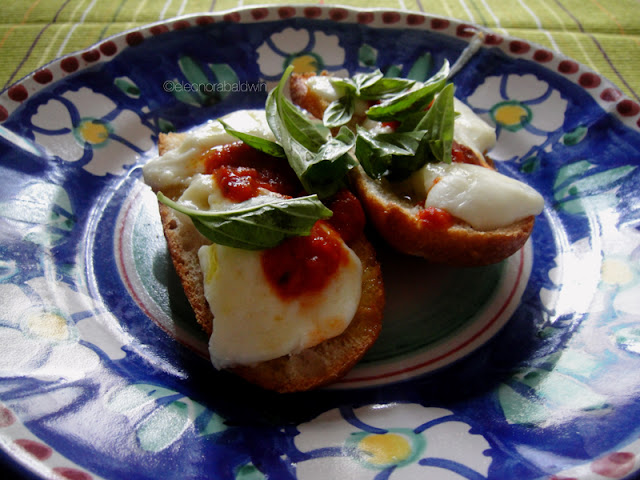