We Italians are great fans of fried fish, and little else will bring smiles quicker around the dinner table than a fritto di paranza, a fry of assorted small fish, whose name is inspired by the typical wooden fishing boats used in southern Italy. 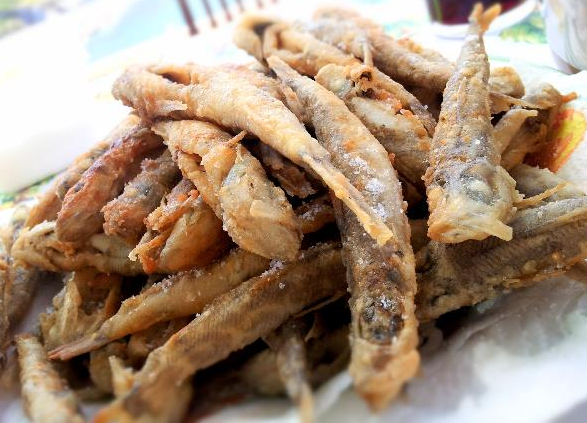 In many families, Christmas Eve dinner revolves around a menu of fresh fish. Before placing the babe statuette in the crèche manger, my family and I will be enjoying crisp fritto di paranza, along with other festive foods.

The requirements for awesome fritto di paranza are using absolutely freshly caught wild fish, and good frying skills.
Some confuse this recipe with Frittura Mista, which also may include calamari, shrimp, prawns, cuttlefish, squid and other assorted mollusks and crustaceans. But traditional fritto di paranza is made with 2-inch long (from head to tail) fish, which have been simply rolled in flour, deep fried, and then served with lemon wedges and a raw onion. You smash the onion, and eat crunchy bits of it with the fried pesciolini – heads and all (unless they're a little larger than 3 inches, in which case you may want to remove the heads). Purists frown on cleaning the fish, claiming the intestines provide a slightly sharper flavor. I prefer my paranza fish cleaned, but when the heads are small they're pleasingly crunchy, and the tails serve as perfect handles.

The best choice for paranza is shimmery-skinned pesce azzurro, and in particular, a local variety of whitebait called Latterini – small silvery-white fish. Latterini generally designate other varieties of small newborn fish, but only latterini can be bought without infringing the law, since these are a particular species whose adults never grow beyond their 2-3 inch size, while as far as the other kinds of newborn catch – like immature herring, sprat, sardines, mackerel, and bass – their marketing is illegal.

Common Neapolitan paranza may include, according to season and availability, small codfish, red mullet, little sole fish (in Naples called fricassuàr) and other small species like anchovies, and rock goby.

Fritto di paranza has one more mandatory clause, and that is it must be eaten absolutely piping hot. The Neapolitan expression frijenno magnanno, refers to exactly that, and it translates "frying and eating," implying the fritto should be eaten as it is being fried.

Wash, clean out and pat the fish dry.

Coat thoroughly with flour, making sure each little fish is well covered. In batches, fry the whitebait for about 3-4 minutes, until crisp and lightly golden. Remove from the bubbling oil with a slotted spoon and drain on kitchen towels. Repeat until all the fish are fried.

Season with salt and serve with the lemon wedges and the raw onion shreds.

Keep crusty home-style bread, and one or more chilled bottles of Vermentino in an ice bucket, within close reach. 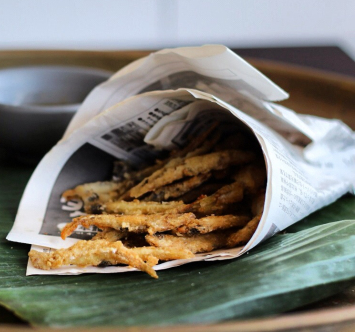