There are many dishes that most Italians have never heard of, and frico certainly falls into this category. Frico is a traditional recipe hailing from the lovely region of Fruli-Venezia Gulia. It is made with a local creamery cheese called Montasio, crumbled or grated into a flat cooked disk.

Frico's Carnic origin of the Northern alpine part of the region is usually presented in two versions: soft, and brittle. Both are served either as antipasto or an entrée. Although recent history sees frico as a dish eaten during holiday season, its original preparation was intended in utilizing leftover cheese scraps. In a previous post, I mentioned the importance of recycling leftover foods. Cheese hardly remains uneaten in my home, but when it does, frico's the answer. 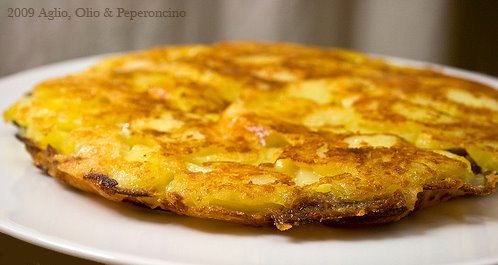 Soft frico is made with younger Montasio added to onions, potatoes oil and seasoned with salt, blended into a kind of omelet sometimes added with leeks and a juniper-flavored ham called speck.

My Udine drinking buddies passed on this potato-less version, but ask me to mention it nevertheless. Boiled and cubed potatoes are added to the blend.

400 g (2 cups/14oz) Montasio, medium age (4-5 months)
Note: for this particular version of frico, Montasio can be substituted with any mature semi-soft chesse, like Munster or Emmenthal
1 white onion
30 g (1 oz) butter
Salt and pepper to taste

Shred the cheese. Finely chop the onion and sauté it in butter in a medium skillet over mild heat. Before the onion begins to tan, quickly add the diced cheese, sprinkling it evenly in the pan. Raise the heat a little bit and continue cooking, constantly stirring in the same direction with a wooden spoon, carefully making sure the cheese doesn’t stick to the bottom of the pan. Season with very little salt and lots of freshly ground black pepper. Cook for a few more minutes, drain away any excess oil the cooking may have rendered, and when the frico has become a gooey golden frittata, you can dive in. 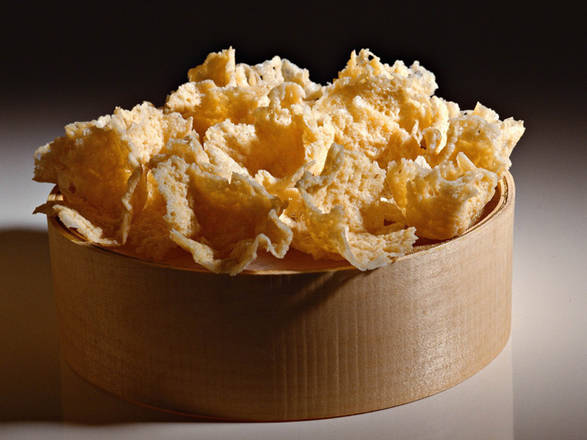 Brittle frico is instead very thin and is made only with mature grated cheese.

It is very easily pliable, therefore I like to shape this second type of frico into baskets, and fill them with polenta, stewed mushrooms, sauteed zucchini or creamy risotto. It's a very easy technique and very fancy-looking. So if you want to impress your dinner guests with a chef-like presentation, read on.

To make a cestino, Italian for basket, you'll need a pristine non-stick frying pan about 20-25 cm (9 inches) in diameter, a pair of Teflon tongs or a fork that won't scratch the frying pan, and a cup, glass or bowl to drape the cheese over. If the pan is in good condition, you won't need shortening to keep the cheese from sticking.

Which cheese for this frico, you say? If you can't get your hands on 1 1/2 cups of grated 18-month aged Montasio, Parmigiano or Grana Padano can be a good substitute, but any firm grating cheese will work, including aged Pecorino Sardo or Toscano, or Pecorino Romano (what's known simply as Romano in the U.S.).

What's important is that the cheese not be overly moist, or filante - that is a cheese that strings out in ribbons when heated, like for example Mozzarella, Jack, or Fontina.

I'm told even grateable goat's milk cheeses can work well because of their fat content. When dealing with cheese, we have to remind ourselves to ban all thoughts of diet and such similar tortures. So when I call a cheese fat, I am actually paying it a compliment.

In making your baskets, you can add flavorings to the cheese, provided they not be too moist: so, poppy seeds, or red pepper flakes, or even finely minced dry basil.

Heat the non-stick pan over medium heat for 2-3 minutes. It should be hot but not searing. Sprinkle the cheese evenly over the pan. By the time you have finished sprinkling the cheese, it will begin to melt, especially around the edges. Let the cheese continue to melt and begin to bubble. 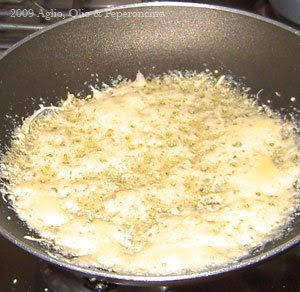 When the edges brown, use a fork or tongs to separate the cheese a little from the sides of the pan. Another few seconds, and the cheese in the middle of the pan will begin to tan. You don't want it to brown, but simply color a little.

At this point, tip the skillet to let the cheese slide out - it will look like a disc - and drape it, browned side up, over a bowl or glass.


The sheet will set in about 15 seconds, at which point you can lift it off the glass.