There are some dishes that improve overnight.

Focaccia Pugliese – a summer spongy, feather light and tasty baked specialty from the region of Puglia (Apulia) in southern Italy – is one of such dishes. Baked fresh, this particular focaccia is fantastic, but the day after... it's even better! 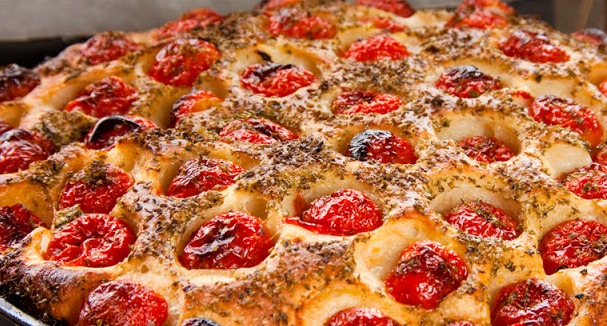 Round, fluffy with it's typically crisp edges and caramelized topping, Focaccia Pugliese (also known as "ruota di focaccia barese") is quintessential street food and the perfect picnic item. When I make it for my son, we always try to leave some for the next day and pack the leftovers in the beach bag for post-swimming munchies.

Focaccia Pugliese's secret is in the dough, which includes boiled potatoes. This gives it a unique soft, springy texture and a beautiful aroma.

Method:
Let the boiled potatoes cool before peeling, and set them aside.
Place flour in a large mixing bowl, and using a ricer, add the potatoes.

Dissolve brewer's yeast in the lukewarm water and add that to the mix as well. Fold in a small pinch of sea salt and begin kneading to obtain a sticky, firm ball.
Wrap in cling film and leave the dough to rise for 2 hours in a warm, dry place.

Press the halved tomatoes in the dough, cut side down, add the olives, a good dusting of oregano and lashings of sea salt.
Drizzle the surface with more olive oil and bake in the hot oven for 20-30 minutes, or until the surface appears evenly browned and tomatoes are caramelized.