Earlier this week I wrote a guest post for Mangia Monday, a weekly column over at Wanderlust Women Travel, in which I spotlighted a secret Tuscan restaurant called Osteria il Vignaccio.

Today I welcome Wanderlust Women Travel's owner Lisa Fantino who will be launching our first installment of the 2010 be My Guest series. Lisa will be taking us to Sicily and introducing us to her Nonna0s rendition of a classic Sicilian dish, Pasta con le Sarde. 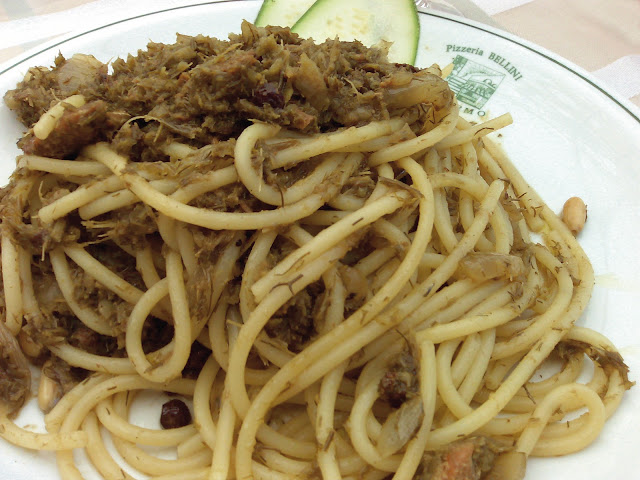 In Italy, this is a seasonal dish, one commonly made between March and September, i.e. the only time of year during which Sicilian pescherie (open air fish markets) carry the perfect size of fresh sardines; and when fields are most abundant with wild fennel just begging to be hand picked.

But let's hear how Lisa makes this delectable Sicilian treat.

Prego, Lisa. The toque is yours.


"Growing up in a Sicilian-American household my lunches consisted of mortadella sandwiches instead of bologna and capicola instead of ham. I also ate babaluci (snails) and vosteddi (spleen sandwiches) but one of my favorite dishes was Nonna's "Pasta Finocchio Sarde" (pasta with fennel and sardines). Now, don't roll your eyes or scrunch your face because I am about to share with you a bit of heaven that's really easy to make because it's partly ready-made.

Trust me, this dish is so easy that I have taught a native Jamaican woman how to make it and she's now speaking with a Sicilian accent. Also, you must know that Sicilians don't measure anything so everything here is an approximation.

Ingredients
5-6 cloves of garlic (or as many as you desire without scaring the neighbors) The garlic should be thinly sliced and not chopped
Handful of pinoli (pine) nuts
Handful of golden raisins (for some reason they taste better than regular raisins here)
Olive oil (extra virgin, first-pressed, certo)
1 can "Condimento per pasta con sarde"
Nonna's cast iron skillet if you're lucky enough to have one.
1 lb perciatelli pasta (some folks use thin spaghetti but I prefer perciatelli which allows you to make that sweet sucking noise as you savor this taste of heaven)

Start by boiling your pasta water so that it can cook while you prepare the dressing which only takes about 5-7 minutes. (BTW – the perciatelli should be cooked al dente. This is the wrong dish for mushy pasta!)

Heat the oil in your skillet until hot and toss in the garlic for a minute and then the pinoli nuts. Simmer until golden brown but do not burn them. Both of these ingredients are extremely delicate in that regard, and can both taste rancid if burnt to a crisp.

Toss in the can of sarde mixture.

Toss the entire mixture over the drained perciatelli and mix well. Serve with grated cheese and/or muddica (typical Sicilian toasted breadcrumb) to garnish.

The dish itself is of Arabic origin, as are many things on the island of Sicily, but don’t tell that to my family." 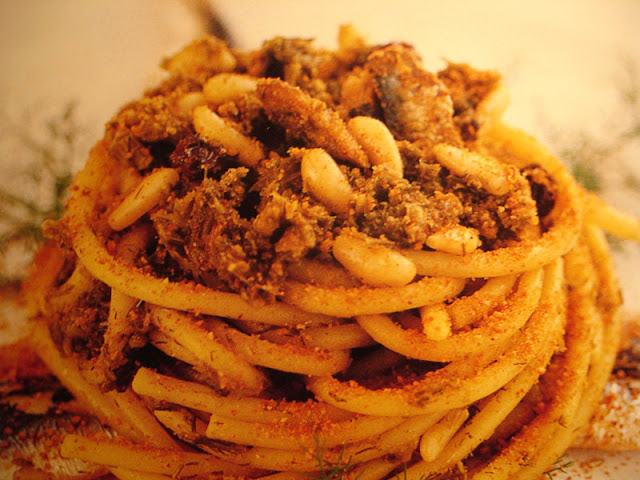 Grazie Lisa, this was wonderful.
I'm sure many native Sicilians out there are swooning with memories of this great dish.

Lisa Fantino is an award-winning journalist and attorney, and the Italy travel concierge and creative force behind Wanderlust Women Travel and the recently launched Amalfi destination wedding site, Wanderlust Weddings. Her love of the Amalfi Coast has also inspired her to gather sterling silver jewelry and gifts inspired by the beauty of the region at Amalfi Blu. She also writes travel features for MNUI travel insurance and blogs as Lady Litigator.

Interested in reading more about Sicily and its glorious food?