Do you get food crushes? You know, that strange alimentary infatuation that makes you want to eat and prepare the same dish over and over? 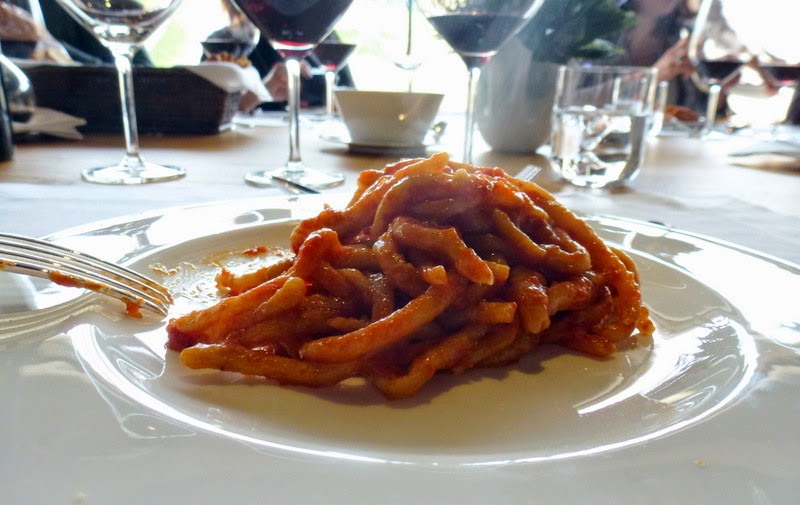 The pici all'aglione I had on a lovely vineyard excursion in Tuscany on the weekend were so delicious, that I had to replicate the dish and eat it again today. And I might make it again before the week is over...

Pici all'aglione is a traditional Tuscan pasta dish, particular to the area around Siena. Pici are thick and rustic, homemade water and flour noodles, and the Aglione sauce is made with slow cooked tomatoes and a big quantity of garlic. It's perfect for vegan and vegetarian dinner guests, since there is no egg in the pasta, and no meat/fish in the sauce.

The birthplace of pici is the rural area of the Val d'Orcia, in the Crete senesi and the Valdichiana valley. This was a rustic, poor man's meal that was filling and whose preparation was traditionally entrusted to the women and children of the family.

Siena homemakers still make pici in their sleep, it's part of their DNA, but local grocers also sell the packaged kind. If you're lazy (like I was today) you can skip the pici-making instructions that follow, and cut straight to the sauce, using regular packaged spaghetti instead. 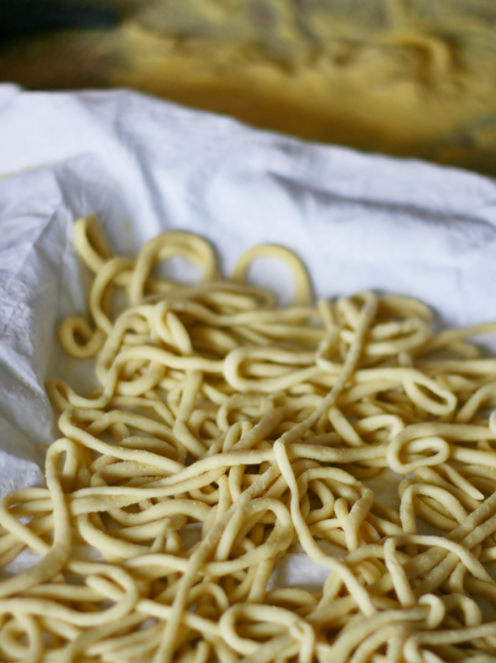 Mix both flours and salt and pour onto a work surface. Make a well in the middle of your mound and pour the olive oil in the "crater." Gradually add warm water a little at time, and mix everything until the dough is firm but flexible. The quantity of the water greatly depends on the way the two flours react. When rolled into a ball, the dough should not stick to the palm of your hand, rather fall out of your hand when you release your fist. If it sticks, you need to add more flour.

Cover the dough with cling film and allow it to rest for about an hour.

Roll out the dough on a slightly floured (preferably wood) surface to about 5 mm (1/4 inch) thick. Slightly grease the surface of the dough, this will prevent the pici from drying during the noodle rolling process, or – worse – stick together into tangled clumps (which will remain raw at the core during cooking!). The action that follows gives pici its name: the verb appiciare, which is dialect for 'stringing into noodles.'

Cut the flattened dough into 5 mm wide strips with a sharp knife or a pizza wheel cutter. Hand-roll the strips into thick, spaghetti-like strands. These should be about 3 mm (1/8 inch) thick and as long as possible, usually pick are as long as 30 cm (12 inches).

Gently smother the pici in a handful of cornflour (polenta) and string them on a tray lined with a kitchen towel. 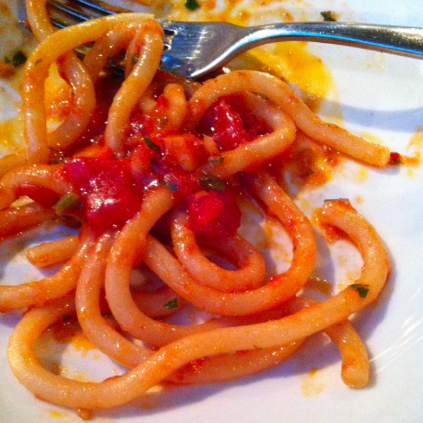 Film a large pan with olive oil and gently sauté the garlic – careful, it mustn't burn.

Add the white wine and cook the minced garlic on gentle heat, using the tines of a fork to further reduce the garlic to a paste.

Mix in the tomatoes, a large pinch of salt and the sugar.

Simmer the sauce on low heat for 30 minutes, stirring occasionally with a wooden spoon.

Cook the pici in a large pot of lightly salted boiling water, for about 3-4 minutes. Shortly before being al dente (about 1 minute), save a teacup of pasta cooking water and crank up the heat under the pot with the aglione sauce.

Drain the pasta and transfer it directly to the sauce, tossing from the pan handle to coat the strands completely in the sauce. Use some saved cooking water if you see the sauce is too "sticky" and needs more moisture.

Serve immediately, and in this case, hold the Parmigiano in favor of a light dusting of Pecorino. 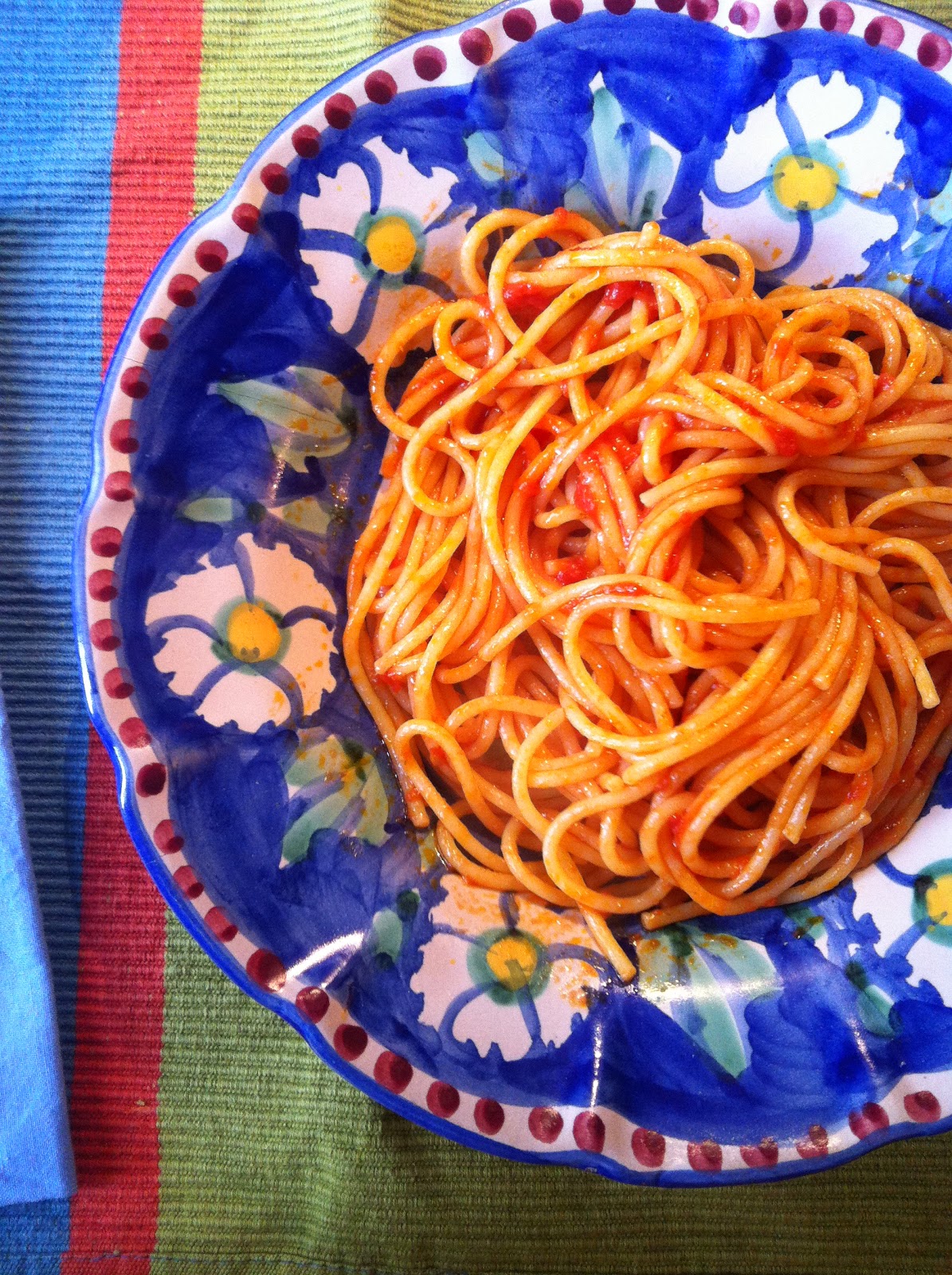 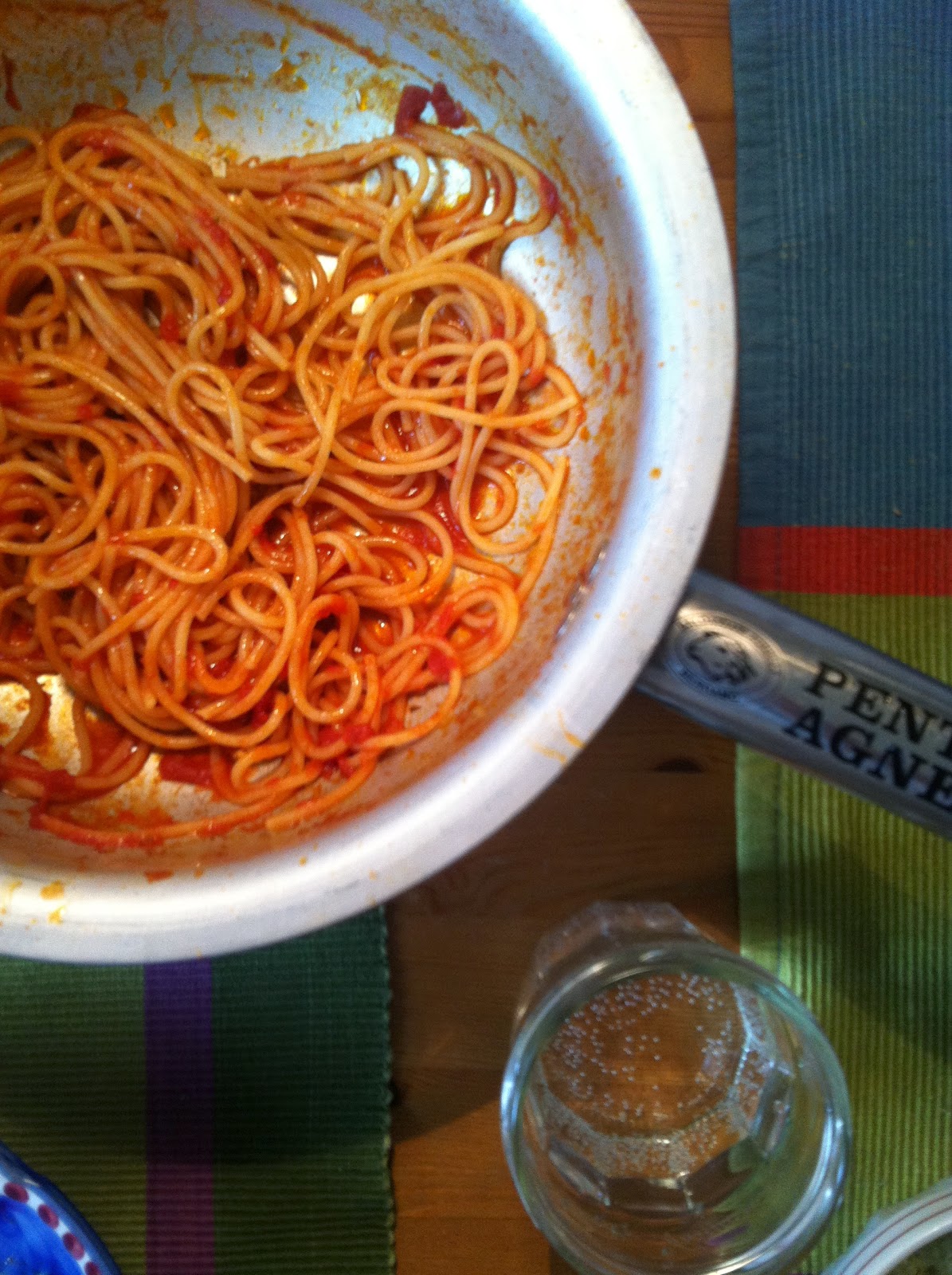