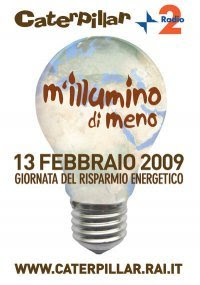 For the fifth consecutive year running, showmen Cirri and Solibello will once again ask their listeners to actively participate in a huge clean energy protest, with a simple throw of a switch.

The play on the famous Giuseppe Ungaretti poem M'illumino d'Immenso - ‘I flood myself with light of the immense’ - in this particular case puns on the word "meno," less. Therefore 'I am less lit' is the event's catch phrase.
M’illumino di meno (or "I will use less light") is both one of the most important awareness campaigns on energy saving and a widespread symbolic one day event. It was first launched on 16 February 2005, when the Kyoto Protocol, aimed at reducing greenhouse gas emissions from developed nations, came into force.
The initiative was first launched by Caterpillar, the popular and successful live radio show which reaches more than a million listeners daily. Caterpillar is broadcast by Radio2, the entertaining channel of RAI, the Italian Public Service Broadcaster. The program airs from 6pm to 7:30pm GMT+1, Monday to Friday and deals with major issues and themes in the world in an informal and ironic way underlining contradictions and paradoxes in our society.

National Energy Saving Day’s philosophy is to convince as many people as possible to focus on saving energy. Everybody will be asked to reduce their private energy consumption to the minimum during the show’s airtime from 6:00-7:30pm GMT+1 worldwide. This allows for maximum visibility in the media and the largest participation by common people concentrated on one single Energy Saving Day.
The most visible effect is created by “energy silence” which consists in the symbolic turning-off of most important monuments and main Italian city square illumination. Institutions, general public, companies, shop-owners, schools, restaurants, gyms and any other kind of association will be participating in their own peculiar way: by switching off shop window sign, computers or electronic equipment in laboratories, organizing candlelight dinners and so on.
The fifth National Energy Saving Day will be held on 13 February 2009. The initiative has received for the second year the Patronage of the European Parliament and aims to grow into a full-fledged European experience.

Notable participants include the President of the Italian Republic, and other high ranking Italian government officials have turned off the lights of the Quirinale, Palazzo Madama and Montecitorio government buildings.
The town administrations of the most important Italian cities also joined the campaign: Rome has turned off the Colosseum, Pantheon and the Trevi Fountain; in Milan, the Duomo, Palazzo Marino and Piazza della Scala; in Turin, the Mole (remarkable the switch-off during the Torino 2006 Olympics Games in 2006) and the Superga Basilica; in Verona, the Arena; in Florence, Palazzo Vecchio; in Bologna, Piazza Maggiore; in Venice, Piazza San Marco; in Naples, the Maschio Angioino; in Siena, Piazza del Campo; in Catania, Piazza Duomo; in Palermo, Piazza Pretoria; in Agrigento, Valle dei Templi. Thousands of restaurant owners have organized candle-light dinners and have offered menus prepared using low energy consumption.
City Hall meetings, association assemblies, and sport team’s trainings have been held in the dark.

Actual savings of the day (as measured by the National Electricity Network) in 2006, here are some figures:
Energy was reduced by the equivalent of the daily consumption of a city the size of Turin. In 2007, it was as if 5 million lamps had been turned-off!

The invitation extends to everybody. WHEREVER YOU ARE simply switch off any unnecessary and non-vital electrical devices and appliances on National Energy Saving Day February 13, 2009 from 6pm to 7:30pm GMT+1.
Click.
Pubblicato da Eleonora Baldwin

Email ThisBlogThis!Share to TwitterShare to FacebookShare to Pinterest
category: sustainable