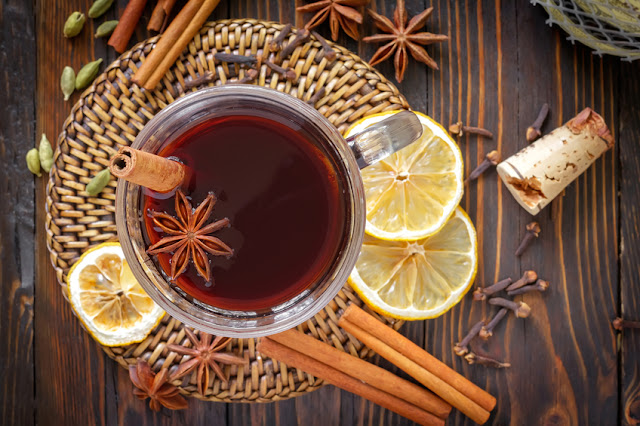 There's nothing quite so warm and welcoming when it's cold out, than a steaming mug of Vin Brulé, or heated, spiced wine.

This Medieval warm wine's birth can easily be attributed to monks, who were known to be expert apothecaries. In monasteries where they led their sober existence (no pun intended) they were dedicated, among other things, to the preparation of wine.

The French term used in Italian Alpine regions for “burnt wine”, is the deliciously aromatic hot beverage in many ways similar to the Anglo Saxon mulled wine or Scandinavian Glögg. Corroborating, reinvigorationg and a potent disinfectant, our vin brulé is an accepted cure against the common cold and winter-related blues. Traditionally native to mountainous areas – where the frigid weather is more frequent – it is often served in high altitude mountain resort lodges, and can therefore explain curious ski slope behavior.

Despite the blazing sun tapping on my windows, the Roman air is still quite nippy. So here goes.
Here are quantities for 2 good drinkers:

Soak the orange and lemon in water and baking soda to rid the rinds of any residue grit. Rinse in cold water and towel dry. Cut the rind thinly with a kitchen knife eliminating as much white pith lining as possible, as this causes the preparation to turn awfully bitter.
In a saucepan, pour in all the ingredients, that is, the wine, sugar, spices and slivered citrus peel.

Bring to a slow simmer over low heat for 5 minutes, stirring constantly or until the sugar has dissolved. Now comes the tricky part. Carefully avoid becoming human torch while lighting the surface of the wine with a long match, not a lighter or any other fire clicker device. The alcohol contained in the wine will catch on fire and you must let it blaze until completely exhausted. During this phase children, pets, body hair, clothing, etc. should be kept at a safe distance.
When the flame dies, filter the wine with a heavy-gauge mesh strainer and serve steaming hot with a cinnamon stick in terracotta, tempered glass or china mugs. Keep several blocks of dark chocolate handy and sip slowly, inhaling sublime vapors while nestled in your lover’s arms snuggled before a wood-burning fireplace. Salute.
Pubblicato da Eleonora Baldwin