Explain the Ecstasy of St Theresa to a 3 year-old

"I saw in his hand a great golden spear, and at the iron tip there seemed to be a point of fire. He appeared to me to be thrusting it repeatedly into my heart, penetrating all the way down to my very entrails; when he drew it out, he seemed to draw them out also, and to leave me all on fire with a great love of God. The pain was so great, that it made me moan; and yet so surpassing was the sweetness of this excessive pain, that I could not wish to be rid of it."


That's ecstasy. Here it is described with surgical precision by the saint who chronicled her own experience. The saint's name is Theresa, and the scene she describes happens every day in the church of Santa Maria della Vittoria on via XX Settembre, in Rome. It takes place in a secluded chapel owned by a noble Roman family, the last one to the left before reaching the altar. 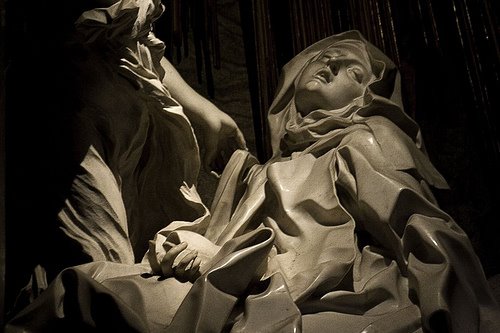 The statues of the marble complex known as the Ecstasy of St. Theresa depict the moment described by Saint Teresa of Avila during her vivid vision of an angel piercing her heart with a golden shaft, causing her both immense joy and pain. The flowing robes and contorted posture abandon all classical restraint and repose to depict a more passionate, almost sensuous trance.

Mr E. and I walked into the chapel this morning after the last pews had been cleared following Mass. We stood there, muted by the monumental Baroque sculpture complex. The natural light coming down from a skylight above, made it all more powerful. The pain described in Theresa's bio was there displayed before us, condensed in the hardness of the snow white marble sculpted by Gianlorenzo Bernini in 1646: the solar plexus heaving, the angel's pike menacing down, the saint's face glowing with divine light. There's been copious literature written on that face. The Marquis de Sade (expert on the subject) said: "One doubts she was a saint." 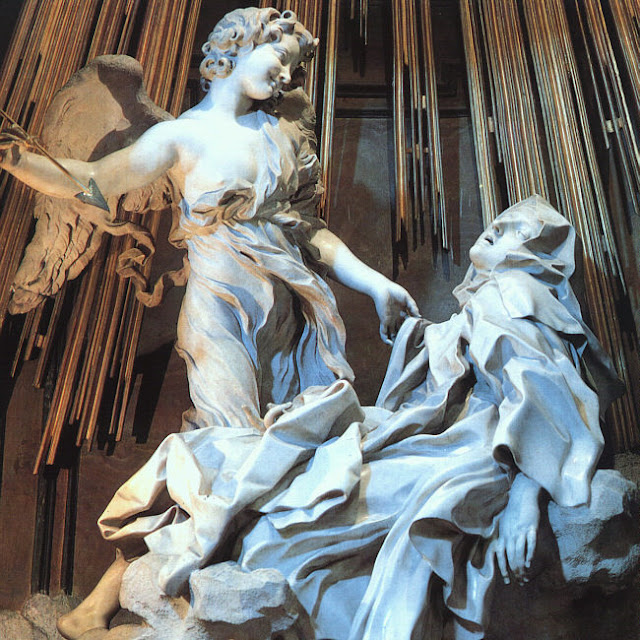 There I stood, bashful and flushed, holding the sweaty, chubby hand of my astounded 3 year-old, before a stone figure having a transverberation orgasm. Bernini, a devoted church-goer, firm believer and artist of immense stature, would never have intended to depict here an episode of lust fulfilled. Instead, Bernini I'm sure, aimed to simply express the facial and body equivalents of a state of divine joy. But Theresa's face speaks volumes, nonetheless.

Next time you're ever in Rome, do take the time to visit the Conero chapel in the above mentioned Roman church, and see for yourself. Was Bernini trying to test his good fortune with a slew of wealthy benefactors by immortalizing a Saint in unsaintly attitude, or was the sensual voluptuousness of the times he lived in, take his hand too far while chiseling away? 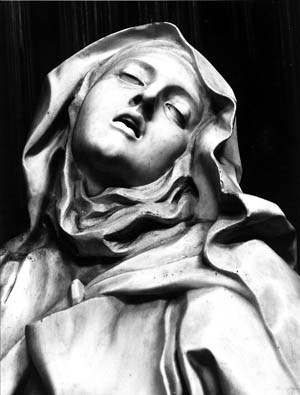