The sea in winter

The gorgeous day beckoned us to the beach. We left after a lazy morning of cartoons and late pyjamas, caffellatte and toast.

The gingerly 30-km drive handed us over to the shore in time for a seafood lunch and a stroll on the water's edge. The crisp, windy air in Maccarese was incredibly clear and we could see the coastline vividly for miles and miles. Funny how a clean atmospheric conditions shorten visual distances. 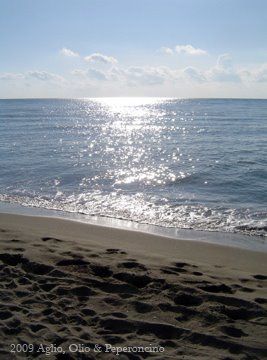 The lifeguard flags flapped fiery red atop makeshift poles and couples laid half dressed on canvas sunbeds, soaking up the early summer sun. We sat on a canopied deck overlooking the beach, at a corner table. We shared the terrace with few other patrons: a Roman family with dog, a young dad on weekend shift with his joint custody kid, 4 young girls giggling into their mobile phones and the 2 sashaying daughters of the cook who waited tables gracefully.

E. and I shared a seafood antipasto of escabeche anchovies marinated in vinegar and lemon; sauteed wedge clam bruschetta; octopus salad; deep fried moscardini and stewed mussels (E. omitted the shellfish). I felt like beer today, so I ordered a chilled Menabrea beer.

We didn't have to wait long for the divine orata gilt-head sea bream baked along with crispy potatoes and halved cherry tomatoes. We devoured our two definitely large portions so avidly and quickly, that I forgot to take a picture to post here.

E. played in the shade while I closed my eyes on a lounge chair, relaxing. I could feel the past week's tensions seeping out of my body as the beer played its usual narcotic effect on me. I tried to stay awake and keep close watch on E. as he quietly shoveled sand, drew maps and built dams at my feet. I kept nodding off but I was scared of falling asleep, so I drank a piping hot double espresso and spotted the man selling kites.

We flew a little orange borrowed one for 30 minutes, and then headed back to the car as the sun began to bid its farewells among a colony of pink, orange and yellow clouds.

This was a good day. I needed it.
Pubblicato da Eleonora Baldwin