Diary from the set, part I

I lied. I said I would post from the road, but I did not.

I'm home for the weekend. On a National holiday the crew gets May 1st off, European Labor Day. I've just returned to my desk from a lovely picnic with friends. We spent the morning playing football and chasing butterflies, the park was noisy with kids' laughter, jaws crunching on fava beans and Pecorino, our posse drunk on Roman sun and strawberry Prosecco.

The work week was good, quite productive despite the unforgiving rain and the usual difficulties of location shooting. The living conditions were tough, the food horrid but the setting was very pretty. I wrote every day, hoping to be able to post, unsuccessfully. I kept drafts and decided to blog them now, one day at a time. I am loyal to my friends and readers, so a promise is a promise where I come from. My wish is to include you in a retroactive journey to the places and feelings I lived in, over the last 4 days.

Here's what I would have posted, had there been a chance. They are more like journal entries than posts. A list of laments in many cases:

The room smells like old cigarettes despite the no smoking sign. At the hotel restaurant I waited close to 2 hours to be served a plate of cold pasta with nondescript meat sauce immediately followed by a dry breast of roasted chicken onto which an entire pepper mill had been spilled. I'm in a rusty mood because I can't understand bad restoration, but contrary to the current predicament, my day did start well. I spent the morning filming in a gorgeous setting, surrounded by lush vegetation, breathtaking vistas and in good company. 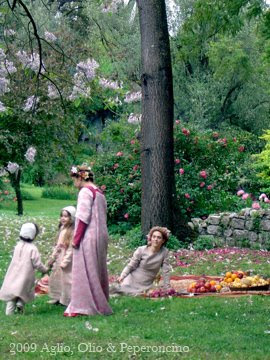 Our lead actress and 3 extras in full costume during a bucolic scene.


The garden of Ninfa is a fairytale haven, esconced at the foot of a sheer limestone mountainside, only a few miles from the sea. Monarch butterfiles and sparrows shared the air surrounding us; we walked amid clusters of snow white roses and languid albino wisteria, 6ft shrubs of laurel and sage lining the gravel paths that crept around the citrus groves and 7 natural springs that snaked around the garden. Being the flora-freak and frustrated garden-less green thumb that I am, I felt like I was in paradise. 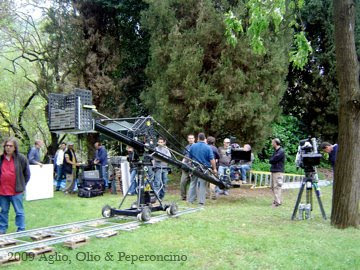 In the half-hour necessary to build the track and the crane used for the first shot of the day, I wandered around the property shooting pictures, smelling the perfumy flowers and taking in the surrounding beauty, drinking it in overflowing gulps. The stony, half crumbled Medieval structures stood standing like empty masks, lay forgotten on a pristine lawn. The beads of dew dotting the yellow acacia blossoms and the Japanese camelia flowers glistened in the pale morning sun, the birdsong sang to my heart notes of peaceful melody. I was ecstatic. These are the days in which I realize how lucky I am to do what I do. My job gives me the opportunity to visit wonders the existence of which I otherwise never would’ve known. 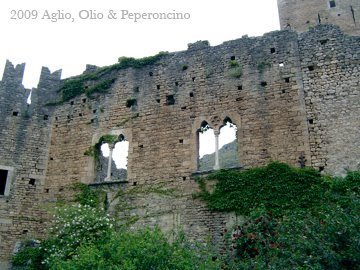 Things started to take on a bad fold when at luchtime, we had to fight for silence after a large group of school kids on a field trip began screaming and racing around the gardens in headless chicken manner. Soon after, dark clouds began to gather overhead and a strong wind began to howl furiously, shaking flowered shrubs and lifting billowing clouds of dust. Trying to take notes and keep track of dialogue and film stock use, continuity and camera reports while marking a 90-page script in a twister-like storm is not easy. I sat on my usual applebox by the wide angle lens camera and was nearly swept off my ample derriere by a strong gust, while the second camera, operating on a steadicam had to give up on a leading shot down a tree-lined path beacuse the wind was so strong, it threw the 300 lb operator+rig off balance. I hate the rain when I’m stuck in it, and the show must go on. 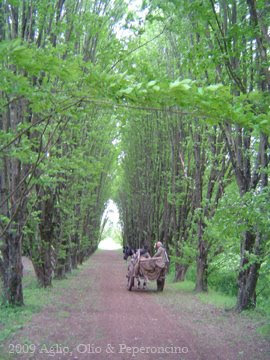 We wrapped the day after completing our 10-hour shift, slapped by violent buckets of chilled water and aggressive gales. After a curvy drive uphill, I walked Marcel Marceau-style into the musty hotel reception, grabbed my key and made for the shower. I must say the little cubicle washing enclosure did restore heat to my limbs. It was a mystic experience. At no less than 110°, I scorched my skin and stood chin to chest under its strong jet for something like 20 minutes, singing the aria "All'alba vincerò" at full lung capacity.

Face flushed by the searing ablution, skin balmed with almond oil and hair wet due to malfunctioning hairdryer, I wafted down to the reception to check my email in the small internet point (a desk in a corner of a dimly lit room). Unfortunately that's all I could do. 25 people in line and no time to log onto Blogger. Too lazy to go out again, discouraged by all the rain that had soaked my bones and that kept pouring in sheets, I opted for a meal in the hotel. Big Mistake. Long wait. Bad food = bad mood. I apologize for the tone, but I am fuming as I write this, knowing it will not be posted.

It's late now, and my eyes are closing. I will try and steer my dreams back to that idyllic garden and like a bee, travel from flower to flower. I’ll transform into a Kafkian bug or a nimble lizard and slip from rock to grass in rapid bursts of cold blooded energy. I'll become a sparrow, diving down from my corner nest barely touching the surface of a stream down below. I'll be a carp, under the surface of the lagoon, calmly observing humans above the shimmering surface in their dry aquariums.

I'll wake tomorrow to another day in a beautiful place. It's Sermoneta domani, where we shoot a crowd scene in the Medieval town's stone alleys. The weather forecast isn't promising, but at least we'll find mushrooms.